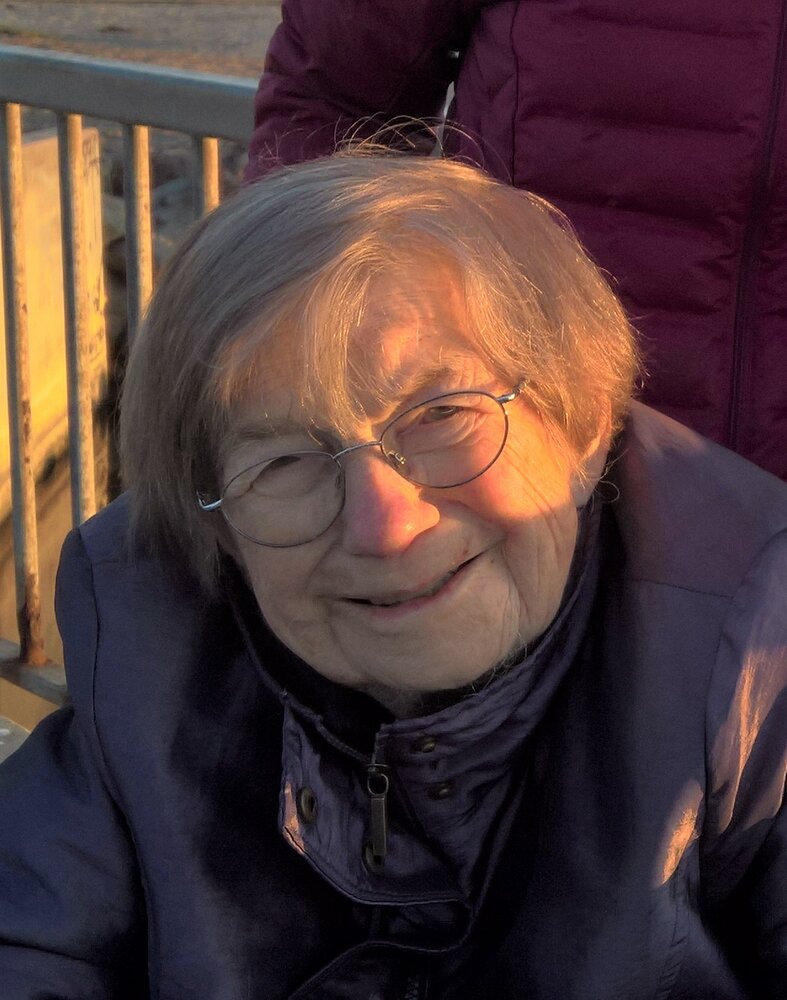 Please share a memory of Irma to include in a keepsake book for family and friends.
View Tribute Book
We are very sorry and sad to report that Irma died on Monday, 21 November 2022. Irma had had mounting medical problems for six months, and eventually the whole burden on her body just became too much. She passed away peacefully with Peter at her side, and without pain. Irma was born on the family farm near Tatamagouche on the north shore of Nova Scotia, Canada on 4th February 1936, to George and Vivian Cock. Irma was the fourth of five children. She is survived by her husband of 56 years, Peter, son Tim (Sandra) and daughter Emily (Dave), five grandchildren, Collin, Ava, Allison, Justin, and Michael, and one brother Lorne (Shirley). Irma was predeceased by her brother Willis, and her sisters Mildred and Kaye. Irma attended the one room school down the lane from the farm, followed by two years at the local high school, and at age 16, went to Mount Allison University as a Freshie-Sophomore. In 1955 she won the Beaverbrook scholarship to study in Britain earned by one student in Canada each year. Irma obtained her masters degree at Wesleyan University in Connecticut. Irma taught high school mathematics, physics, and computer science in Nova Scotia, Quebec, southern California, and later in Ontario. Irma and Peter met in Montreal. It was very common in Quebec province for groups of young people to rent a ski house in the Laurentians in the winter. The gently applied rules for this ski house were that everyone could ski, cook, and play bridge. Irma was excellent at all three. They were married in 1966, continued to work in Montreal for a year, then left town on what was the beginning of world-wide travel over the years. Tim was born in Laguna Beach in 1970, and Emily in Halifax in 1973. Peter’s work brought them to Silicon Valley in 1999. They bought a house in Aptos, but very soon after Peter’s work took him, and Irma, to Sweden. In 2002 Peter retired, and they returned to Aptos. Irma loved games and puzzles. She could spend hours doing crosswords. The Scrabble dictionary was never far away. She rarely lost a game of cribbage. Just two weeks ago, when Michael, her ten year old grandson was visiting he wanted Grandma to teach him to play cribbage. Irma taught him so well that he won his first game against her. She had grown up in a family who played bridge around the kitchen table, and she played duplicate bridge at the Santa Cruz Bridge Club and in tournaments across the continent, often coming home with trophies. Her last tournament was in July, in Little Rock, Arkansas. She led a Learn to Play Bridge group as part of the UCSC Women’s Club. When she was younger she played badminton and curling. She was in three book clubs and participated in interest groups in Life Long Learners. She was an active member of Saint Andrew Presbyterian Church in Aptos, and from time to time read in services. Irma delivered Grey Bears food bags to the homebound for 20 years. She and Peter would walk by Seacliff Beach nearly every day, even once Irma had a limited ability to walk and was mostly in a wheelchair. Irma was a busy lady, very practical, kind and understanding. We have a family tradition of a getting together every five years, for a week or ten days, renting a large house to accommodate all eleven of us. In July this year we had our get-together in Scituate, Massachusetts, and are very thankful we were able to do so. A less conventional and more detailed obituary will be available shortly at irma-andews.com and at irma-andrews.ca. We hope you will share your memories there. It is planned to have a memorial service and a reception on 2nd January in Aptos. Details will be added to the websites when confirmed.
To plant a beautiful memorial tree in memory of Irma Andrews, please visit our Tree Store

Look inside to read what others have shared
Family and friends are coming together online to create a special keepsake. Every memory left on the online obituary will be automatically included in this book.
View Tribute Book
Services for Irma Andrews
There are no events scheduled. You can still show your support by planting a tree in memory of Irma Andrews.
Plant a tree in memory of Irma