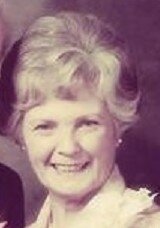 Please share a memory of Harriet to include in a keepsake book for family and friends.
View Tribute Book
Born in Peoria, Illinois on Thanksgiving 11/26/1920 to Mabel Mae and Julius Scherer. She was the fourth of six children that Mabel and Julius had. Her Mother always said she was her “Thirteen Pound Turkey”, since she was born on Thanksgiving and the biggest baby she had out of the six. Harriet went to Peoria High school, was in A Cappella choir, G.A.A and was Home Coming Queen in her Senior year. She met her husband Donald Gracier in 1937, her sophomore year. They dated off and on in their Junior and Senior year. Donald always telling her that he would marry her someday. After High School, in 1939, they dated and Harriet got a job a Caterpillar Tractor Company until August 1942. Donald went off to college at Purdue University and would see Harriet on weekends, finally asking Harriet one more time if she would marry him, she finally said Yes. They were married June 20, 1942. They were married for 64 years, having three children, Donna, Diane and David. They went through Donald going into WWII. After WWII, they lived at Purdue, so that Donald could finish his degree in Mechanical Engineering and they then moved to Campbell, California, where Donald got a job at Westinghouse as a designing engineer and bought their first home. By then they had two children Donna and Diane. In 1951 they welcomed the birth of their son, David Michael Gracier. At the same time as David’s birth, Donald had two months left of the reserves in the Army and got called to Korea. Harriet took good care of the kids while he was gone, which was 1 year and six months. Donald’s family was close so she had backup if needed. Harriet was in a women’s group in Campbell and loved to play Bridge. A year after Donald got back from Korea, they moved to a bigger house just outside of Campbell, having a wonderful life with family and friends. They retired to Sonora California in 1983, becoming members of the Twain Harte Golf Club and Saints Catholic Church. Harriet was President of the Women’s golf club for one year. In their marriage together they camped with their kids and friends at many parks in California, loved golf, and playing games with their kids and grandkids. Donald passed away in 2006, Harriet left Sonora in 2011 moving to Scotts Valley, California to be closer to her daughter Diane. She leaves behind her children: Donna Louise Wool, Diane Michele Cooke and David Michael Gracier along with fifteen grandchildren and eighteen great-grandchildren and one great- great-grandchild. Harriet Louise Scherer Gracier will be missed. Family and friends are invited to attend her funeral and interment on Saturday, December 10, 2022 at 12 noon, at the Chrystal Chapel at Oakwood Memorial Park, 3301 Paul Sweet Road, Santa Cruz, CA.
To send flowers to the family or plant a tree in memory of Harriet Gracier, please visit Tribute Store
Saturday
10
December

Share Your Memory of
Harriet
Upload Your Memory View All Memories
Be the first to upload a memory!
Share A Memory
Send Flowers
Plant a Tree