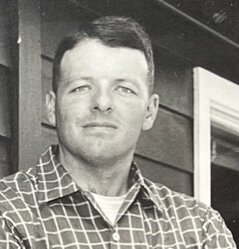 Please share a memory of William to include in a keepsake book for family and friends.
View Tribute Book
William B. Weston Jr., a third-generation Santa Clara County pear grower and longtime resident of Santa Cruz County, died on Tuesday, Oct. 4, with his family by his side. He was 94. Bill was born in San Jose to William B. Weston Sr. and his wife, Juliette Perrin Weston. He was raised on Peraleda Ranch near Santa Clara, where the family cultivated nearly 300 acres of pears across multiple orchards. Bill spent his childhood roaming the ranch with his sisters, often trailed by his first dog, Whiskey. During World War II, Bill boarded at The Thacher School, a high school in Ojai, CA. He frequently told stories of his time there, where he enjoyed his classe, but loved the outdoor orientation of the school, learning to explore wilderness areas on foot, horseback, and with pack mules. In 1951, Bill earned a degree in Business Administration from Claremont Men’s College, now Claremont McKenna College. His favorite memory was being stood up for a big dance. A friend hurriedly arranged a blind date, which is how Bill met his wife of 63 years, Jessica Idanthea Beyette, a student at neighboring Scripps College. In a toast at their 50th wedding anniversary, Bill thanked the woman who failed to show up: “If she hadn’t done that, I would never have met the love of my life.” Bill and Dannie, as she was known to all, were married days after their college graduations in 1951. They moved to Fort Lee, VA, where Bill began four years of service in the United States Army, completing his service closer to home at Fort Ord in Monterey County as a First Lieutenant. They returned to live on Peraleda Ranch just in time for Bill to take charge of the 1954 pear harvest. Over the years, Bill served on multiple associations representing fruit growers, locally and statewide; on the Santa Clara County Grand Jury; as a Boy Scout Troop Leader; and as unofficial camping trip leader for his daughters’ Girl Scout troop. In 1973, he became his wife Dannie’s behind-the-scenes partner when she started Old Orchard School, a private K-8 school in Campbell. Bill’s longest service was with the Rotary Club. He first joined the San Jose club in 1955, and joined the Capitola-Aptos club in 1979, when he and Dannie moved to Soquel after the dissolution of Peraleda Ranch. Bill and Dannie forged a new family of friends around their mountain neighborhood off Laurel Glen Road. They also traveled widely, frequently in their Airstream motorhome. They especially loved bringing their granddaughters on these outings. Together, Bill and Dannie worked countless Rotary Club charitable events, with Bill towing his event-worthy barbecue across Santa Cruz County to grill at fundraisers. Bill had the honor of nominating the club’s first woman member. Following Dannie’s death in 2013, Bill continued to look after his mountain property, driving his Massey-Furguson tractor well into his 93rd year; visiting with his Twin Lanes neighbors, a large dog often at his side; and hosting family at his home. Earlier this year, declining health necessitated his move to Dominican Oaks in Santa Cruz. Bill’s eldest sister, Nancy P. Weston, died in 2011. He is survived by his sister Julie Suhr, of Scotts Valley; his children, William B. Weston III of Studio City (Liz Pulliam Weston); Perrin Weston Coman (Chase H. Coman), of Carlsbad; Bonnie E. Weston, of Santa Cruz; granddaughters Emerson K. Coman and Elizabeth Beyette Weston; and his sister-in-law, Beverly Graber. A private burial service was held on October 18. A memorial Celebration of Life will be held later this year. In lieu of flowers, donations may be made to Second Harvest Food Bank of Santa Cruz County.
To plant a beautiful memorial tree in memory of William Weston, Jr., please visit our Tree Store

Look inside to read what others have shared
Family and friends are coming together online to create a special keepsake. Every memory left on the online obituary will be automatically included in this book.
View Tribute Book
Services for William Weston, Jr.
There are no events scheduled. You can still show your support by planting a tree in memory of William Weston, Jr..
Plant a tree in memory of William