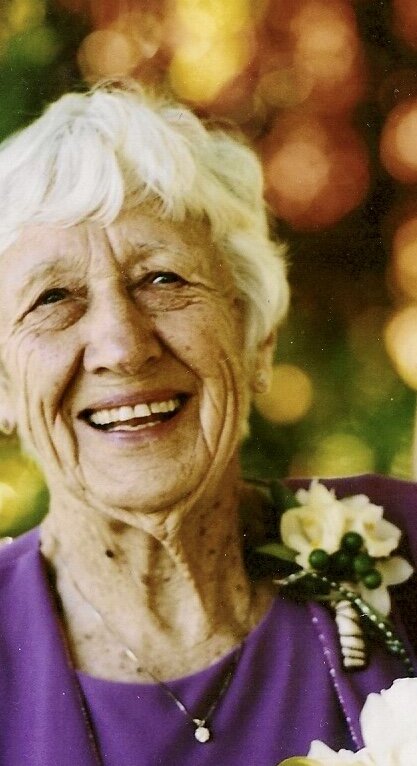 Please share a memory of Carolee to include in a keepsake book for family and friends.
View Tribute Book
Carolee Hansen Todd passed away peacefully in her home on Aug 8, 2022, a month after her 100th birthday celebration. She was a native Californian and proud of it. Born in the Salinas Valley, raised on a ranch in Gonzales, CA, she was the first in her family to graduate from college. After graduating from UC Berkeley during World War 2, she moved to Santa Cruz where she worked in the Old Dominican Hospital as a lab technician. She then lived in Santa Cruz for over 75 years, until her death. She met her future husband, Clifford Todd, on a blind date at a CAL alumni Christmas Party held in Santa Cruz. They were married in 1947, but in 1957 Cliff died unexpectedly following a stroke. They had two children Gary Todd (Anne) of Los Gatos, CA, and Margie Todd Van Duzer (Jeff) of Seattle WA. As a widow, Carolee devoted her life to her children, her extended family, her friends, and organizations that served those in need. She was a member of First Presbyterian Church of Santa Cruz for over 50 years and served many years as a deacon. As an active member of National TTT Society, she worked to provide camping experiences for girls, and spent countless hours at her sewing machine, making bibs and blankets for newborn layette packages distributed by county public health nurses. A woman of few words, she demonstrated love and care by her many deeds of loving service. She loved the national parks, working at Sequoia National Park while in school, and asked to go to Yosemite for her 90th birthday. (It took some coaxing to keep her from trying to hike the Vernal Falls Trail.) She enjoyed other group physical activities such as volleyball, water aerobics, and walking the neighborhood with friends. She also had a feisty competitive spirit and loved to play cards. Even when her memory was failing her towards the end of her life, she continued to not only enjoy playing Bridge, but continued to enjoy winning. She also was an avid sports fan, keeping track of the SF Giants, Golden State Warriors, and her beloved CAL Bears. Her friends and family were very important to her and she was deeply loved by them all. Along with her two children and their spouses, she is survived by her 4 grandchildren (Laura, Andrew, Matt, and Nate) and 6 great-grandchildren. The family would also like to thank her caregivers, especially Maria Lumanta, Pacencia Sullano, Ninfa Annan and the late Naty Demayo for their incredible compassion, care, and resourcefulness to allow Carolee to remain in her family home until the end of her life. A memorial service in her honor will be held at Trinity Presbyterian Church, Santa Cruz, on Sat Oct 1 at 1pm.
To send flowers to the family or plant a tree in memory of Carolee Todd, please visit Tribute Store
Saturday
1
October

Share Your Memory of
Carolee
Upload Your Memory View All Memories
Be the first to upload a memory!
Share A Memory
Send Flowers
Plant a Tree