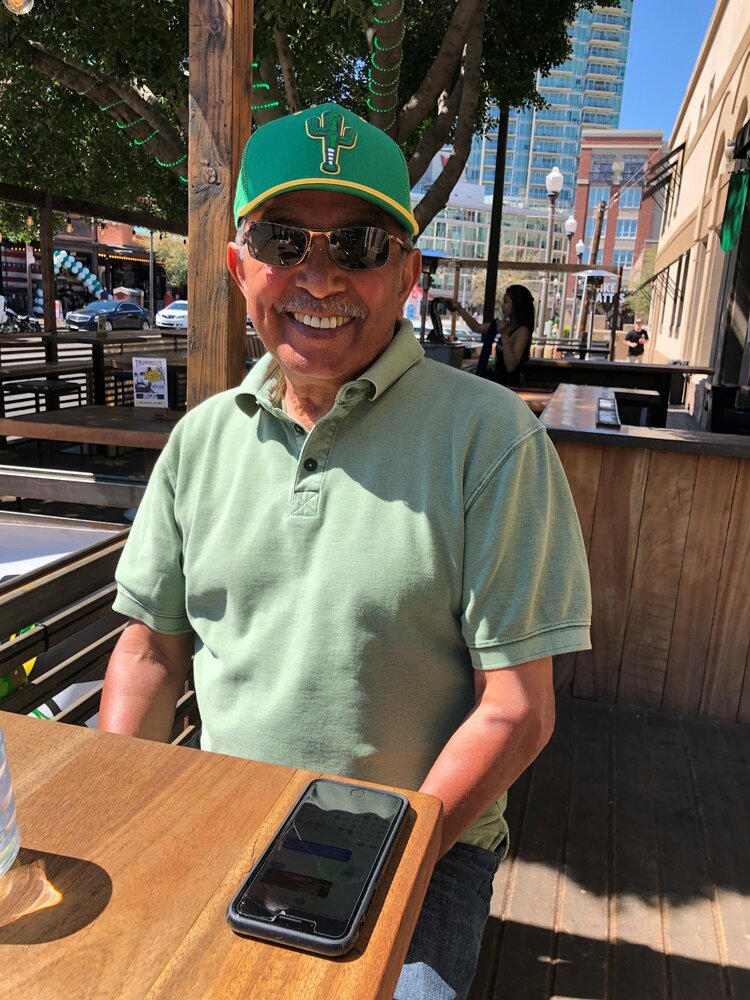 Please share a memory of Rudolph to include in a keepsake book for family and friends.
View Tribute Book
Rudolph (Rudy) Cabigas: Husband, Father, firefighter, gun enthusiast, fix-it man, traveler, history buff and reenactor, gardener, photographer, outdoors-man, A’s fan, engaged community member, big smile, friend to all. Rudy was born in San Jose, CA on Jan 29, 1951, to Ciriaco Cabigas and Nico (Aguilera) Cabigas, and died at his home in Scotts Valley, CA following a 2 ½ year battle with cancer, on June 5, 2022, surrounded by his family and close friends. Rudy graduated from Piedmont High School in 1969. After working for the US post Office for six years, he began a career in firefighting with the San Hose Fire Department, having been inspired by his brother, Richard, who served in Vietnam before dying of cancer. Rudy worked at Fire Station 18 for many years, culminating his 30-year career at Station 27 as Captain. He was very proud to be part of the SJFD. Retiring in 2006, he was elected to service two terms on the Scotts Valley Fire Board. Anyone who knew Rudy at all knows he was a very personable, gregarious man! The very definition of a people person, he had wide ranging interests and a genuine interest in other people, leading him to strike up conversations with just about anybody. Quite often wit was the cashier at a convenience store, or server at a restaurant. He was always the last one at the party. Rudy was a gun enthusiast, enjoying target shooting and hunting, the latter waning as his rheumatoid arthritis progressed. He was a charter member of the Schaefer Deer Camp, spending a week or two almost every November with his brothers-in-law in Michigan’s Upper Peninsula from 2008-2019. Although he brought his usual enthusiasm and hunting skills, he never shot a deer, earning the nickname, Rueben (the “Buckless Yooper” from the movie “Escanaba in Da Moonlight”). His buoyant spirit brought life to Camp. His knowledge of poker forestalled many arguments. His jambalaya brought much needed heat. Rudy wove his love of horses with historical and community interest. He belonged to the Philippine Scouts Heritage Society (PSHS), feeling very strong about representing his father who had been in the 26th Calvary in the Philippines. He dressed in a replica of his father’s uniform, teaching the public about the history of the cavalry. He rode a horse for many years in the Felton Memorial Day parade, and with the PSHS in several parades across CA. His crowning achievement with the group as riding in the 2017 Rose Parade in Pasadena. Rudy also brought history to life through his extensive collections of model WWII military vehicles and aircraft, which he assembled and painted. His Korean War era jeep was well known in the area, with Rudy behind the wheel at Memorial Day and July 4th parades in Felton (serving as Grand Marshall one year) and Scotts Valley. With a 50 cal. Machine gun mounted in the rear, it was a memorable sight. The unofficial “mayor” of Scotts Valley, Rudy was very involved in community activities and it seems everyone knew him. He enjoyed photography and was often requested to take pictures at community events. His camera was always active at family gatherings, for which we are grateful. Rudy truly valued family and friends, and was generous to a fault when the need arose. While Rudy had many interests, hobbies, and activities to keep him busy, family always came first. His wife, Belinda, and daughter, Katelyn, were number one in his life and he was always there for them. Rudy loved music, attending an enviable number of live performances. He was partial to wine and often helped his friend, JJ, in the wine making process. He enjoyed many outdoor activities and was an avid fan of the Oakland Athletics. Spring Ball in Arizona with Belinda was high on his “to do” list every year. Rudy’s home landscape stands as a testament to both his skill and patience as a gardener. He had a particular talent for cactus, but his rose trees, fruit trees, and vegetables prospered as well. And of course, the vegetables would end up in the kitchen where Rudy also displayed some skill. Rudy could roast a pig with the best, in good conditions or poor. Under poor conditions his ability to fix things came into play. Roasting a front quarter in an abandoned fireplace come sot mind. The confidence that he could fix something, whether he had done it before or not, made him a true fox-it man. If he didn’t know how to do it, he would figure it out. Rudy loved to travel (Philippines, Bolivia, Costa Rica, Panamá, Belize, Guatemala, Perú, México, Spain and France) but also described himself as a “simple man”, happy to spend time in his yard or puttering around in his hobby house. Preceding him in death were his parents, Ciriaco and Nico Cabigas, and his brother Richard. Survivors include his wife, Belinda, daughter Katelyn, his siblings, Ruben (Sonya) Cabigas, Bobby (Tami) Cabigas, Rachel (Richard) Savedra, and sisters-in-law, Charlotte Cabigas and Rose Hughes. Rudy lived life to the fullest, and did his best to encourage the rest of us to join him.
To send flowers to the family or plant a tree in memory of Rudolph Cabigas, please visit Tribute Store
Monday
27
June

Share Your Memory of
Rudolph
Upload Your Memory View All Memories
Be the first to upload a memory!
Share A Memory
Send Flowers
Plant a Tree