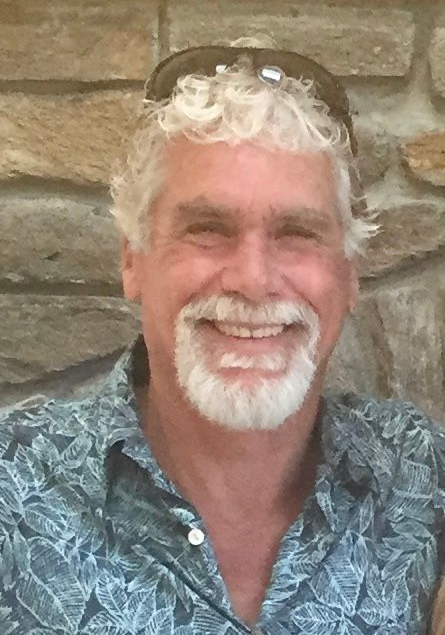 Please share a memory of Michael to include in a keepsake book for family and friends.
View Tribute Book
Mike and Jennifer had just returned from Bend, Oregon, where they had a most wonderful visit with his daughter and her family in their new second home on the Fall River. Mike was so happy to have been there and was happy to be back home again in the Santa Cruz Mountains. That evening he had a heart attack and died. He seemed so healthy, strong, and vibrant. No one expected this. Mike spent his youth in Santa Barbara running and playing on the beaches with his younger brother Regan. This was a time when kids could run free and explore all day without parental worry. He was an active class clown, much to the dismay of his teachers and to the great amusement of his classmates. When he was 12, his parents moved to Santa Maria. During high school, Mike’s mother got him a job at the Anderson Pea Soup factory diner making pea soup because she was trying to feed too many children and the job came with “all you can eat.” Upon graduation from high school in 1966, Mike was presented with the prestigious award of Santa Maria High School Physical Fitness Champion. He also received a Letter of Recognition for his Scholastic Achievement During the Past Four Years from the Santa Maria Valley Scholarship Association. The Viet Nam War was raging, and Mike chose his best option when it came to signing up with the draft board. In September 1966, he enlisted in the Navy Reserves to serve his country. He had basic shipboard training aboard the WALTON out of Treasure Island off San Francisco (where both his parents had met in the Navy during WWII). He graduated from the U.S. Naval Dental Technicians School at the Navy Training Center in San Diego in February 1968. Mike served active duty on the USS MARKAB in the South Pacific during the war, traveling to Hawaii, the Philippines, Taiwan, and Japan before returning to San Francisco. He enjoyed body surfing in the Philippines and climbing Mt. Fuji in Japan. The ship barely made it back to San Francisco, and Michael was an Honored Member of the “illustrious crew” that deactivated the USS MARKAB (AR-23) and entered it into the Mothball Fleet. After the Navy, a service friend brought Mike to Santa Cruz where he took up residence at different locations all over the county - from Rio Del Mar to Bonny Doon, from the eastside of Santa Cruz to the mountains near Loma Prieta. While attending Cabrillo College he met his wife of 10 years, Cindy Hatten, and had a daughter, Devon. Mike also attended UCSC where he studied Political Science and History. For 11 years (1974-84) Mike was in the Teamsters Union and worked as a driver for Hadley Auto Transport, loading and unloading vehicles from trains in the rail yard. It was dangerously hard work but paid well. He thought of himself as a “stunt driver.” Later, he had a variety of jobs, including polishing stone floors in San Francisco with Master Marble Finishing, Inc., Water Quality Control Equipment Manufacturing in San Jose, landscaping in Santa Cruz with Coastal Evergreen, and construction work with many friends. He loved bodysurfing, playing guitar, going to concerts, adventure travel, nature, and the mountains. He saw all the musical icons that were touring in the ‘60s and ‘70s and attended the Monterey Pop Festival. He had an incredible memory for music and personalities of the times, as well as world history. He saw and experienced things that were iconic of the ‘60s and early ‘70s, both frightening (Viet Nam War, seeing police in Berkeley take to the rooftops with guns to deal with war protesters) and joyful (hippie times of sex, drugs and rock ’n roll). He was a free spirit, a minimalist who could travel with just a small backpack and was proud of his Irish and Dutch heritage. His many trips to Mexico and Central America, where he crawled through Mayan ruins in Chiapas, body surfed off the Oaxacan coast, and stayed in a treehouse in the jungle of the Osa Peninsula in Costa Rica, enabled him to become fluent in Spanish. In other languages he just knew the swear words. Mike is survived by his daughter Devon Linneman (Dan); two granddaughters, Justine and Natalie; four brothers, Regan Barry (Lori), Kevin Barry (Vicki), Eric Barry (Kim), and Dick Barry (Betty); two sisters, Suzanne Thompson (Britt) and Kristina Barry; many cousins, nieces, and nephews; and his true companion of 18 years, Jennifer Clinton. He was preceded in death by his parents, Elsa and Edward Barry. The family plans to honor Mike with a private catamaran cruise on the Monterey Bay, followed by a previously planned family gathering at Seacliff beach to honor his mom, Elsa Barry, who passed away last year.
To plant a beautiful memorial tree in memory of Michael Barry, please visit our Tree Store

Look inside to read what others have shared
Family and friends are coming together online to create a special keepsake. Every memory left on the online obituary will be automatically included in this book.
View Tribute Book
Services for Michael Barry
There are no events scheduled. You can still show your support by planting a tree in memory of Michael Barry.
Plant a tree in memory of Michael

Share Your Memory of
Michael
Upload Your Memory View All Memories
Be the first to upload a memory!
Share A Memory
Plant a Tree