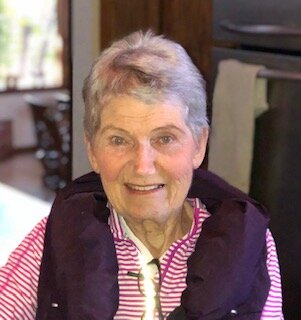 Please share a memory of Gwendolyn to include in a keepsake book for family and friends.
View Tribute Book
Gwen Marcum’s life began in a small Iowa farm town in 1935 and came to a peaceful end on April 19, 2022, in her beloved seaside town of Santa Cruz. It was truly a remarkable journey, and she touched so many lives along the way. Growing up on a farm in Menlo, Iowa instilled in Gwen the small-town midwestern values of humility, hard work and community. One of four girls, Gwen didn’t need to be taught that women could do the same jobs men could - she simply lived it. She got up at dawn to feed pigs and cattle before heading to school where she also excelled. After graduating from Simpson College in 1957 and receiving her Master’s Degree from American University she took that work ethic and her deep intellectual curiosity with her out into the world. After traveling to Ghana on an international exchange, Gwen returned to Washington D.C. where she worked for the Washington Post. It was during this time she met her husband John, himself a renowned Africa scholar. Later she participated in the Mississippi Freedom Summer helping to register Black voters in 1964. She was present at Martin Luther King’s famous “I Have a Dream” speech. Her activism continued throughout her life and even at the age of 71 she returned to Iowa in 2007 to canvas for the upstart Senator Barack Obama. Here in Santa Cruz, it seemed like everyone knew Gwen. Gwen and John moved to Santa Cruz in 1972 where they became early members of the UCSC faculty community. As the wife of a Provost-turned Vice Chancellor she hosted innumerable social functions and was a pillar of the campus community. Others knew Gwen from her involvement in youth sports, where she coached kids’ soccer and basketball and imbued her teams with her personal motto “Hustle Makes it Happen.” Perhaps Gwen’s biggest mark on her community was with the Capitola Book Cafe, which she owned along with three other remarkable women. For 30 years it was a center of literary, intellectual and social life in Santa Cruz County, bringing in authors and speakers from around the world. It was where her small-town hospitality and worldly curiosity thrived. A voracious reader herself, Gwen was a fixture behind the counter with her warm smile, signature cup of black coffee on hand and her favorite gospel music on the stereo. A member of the American Booksellers Association, Gwen was fiercely committed to independent booksellers and was a leader in the effort to protect local bookstores from the incursion of big box chain stores in Santa Cruz County. Gwen is survived by her three grateful children, Andrea, Ed, and Art. And by her grandchildren whom she loved so much, Spencer, Jackson, Jasper, Jaya and Kaasi. All of them live inspired by her example. She will be deeply missed.
To plant a beautiful memorial tree in memory of Gwendolyn Marcum, please visit our Tree Store

Look inside to read what others have shared
Family and friends are coming together online to create a special keepsake. Every memory left on the online obituary will be automatically included in this book.
View Tribute Book
Services for Gwendolyn Marcum
There are no events scheduled. You can still show your support by planting a tree in memory of Gwendolyn Marcum.
Plant a tree in memory of Gwendolyn

Share Your Memory of
Gwendolyn
Upload Your Memory View All Memories
Be the first to upload a memory!
Share A Memory
Plant a Tree