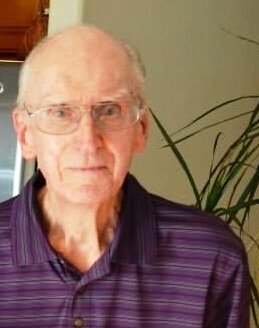 Please share a memory of Gunnard "Gus" to include in a keepsake book for family and friends.
View Tribute Book
Gunnard “Gus” Axel Beckstrom passed away peacefully on Sunday, February 13, surrounded by his loved ones. Gus was born to Axel and Hilma Beckstrom in Moline, Illinois in May 1921. The youngest of three, he grew up with his two sisters, Alice and Florence, in Chicago. He met his beloved wife, Yolanda “Yo” Marie Tanenbaum, in 1942 at the Western Electric Company where they both worked. They became engaged shortly before his deployment to Europe where he served as a Sergeant in the Army during WWII. During that time, Gus was the recipient of a number of medals and achievements for his outstanding performance of military duty, including: European Theater of Operations The Certificate of Merit, Victory Medal, American Theater Ribbon, four Overseas Service Bars, one Service Stripe, Good Conduct Medal, European African Middle Eastern Theater Ribbon, and W/1 Silver Battle Star. When WWII ended in 1945, Gus returned home. The following year, he married his fiancé, Yo, and they spent the next 70 years together, until Yo’s passing in 2016. Gus and Yo built a beautiful life together. They settled in Northbrook, Illinois, after they married, and had two children, Glen (1947) and Lynn (1951). In 1961, Gus made a career change that took them from Illinois to Sunnyvale, California. Outside of work, he enjoyed golfing and skiing with his family. Upon his retirement in 1982, Gus and Yo moved from Sunnyvale to Lake Wildwood, a golf community in Penn Valley, California. An avid golfer, Gus spent a majority of his retirement years on the course, playing nearly every day at his local course and as a regular in tournaments. He moved to Santa Cruz, California in early 2020, at the start of the pandemic, to be closer to his daughter and son. Gus is survived by his son, Glen Beckstrom; daughter, Lynn Nilsen; son-in-law, Don Christl; granddaughter, Krista Nilsen; great grandchildren, Beck Bordner, Kennet Bordner and Kari Bordner; grandniece, Allison Sayerstad Odere, and her husband, David; nephew, Allan Sayerstad and his wife, Pat, and their children; and niece Juanita Groff. A small memorial service will be held on Saturday, February 26, 2022, at Oakwood Memorial Park at 2 pm PT. In lieu of flowers, the family asks that loved ones donate to a charity of their choice.
To send flowers to the family or plant a tree in memory of Gunnard "Gus" Beckstrom, please visit Tribute Store
Print
Saturday
26
February

Look inside to read what others have shared
Family and friends are coming together online to create a special keepsake. Every memory left on the online obituary will be automatically included in this book.
View Tribute Book
Share A Memory
Send Flowers
Plant a Tree