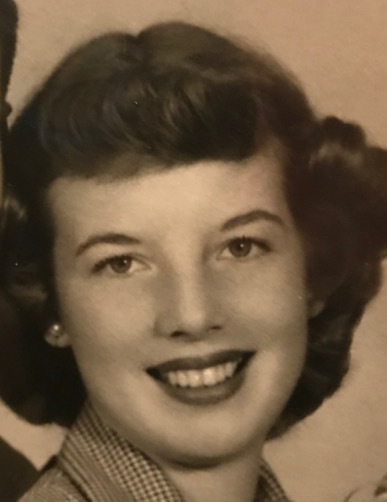 Please share a memory of Ada to include in a keepsake book for family and friends.
View Tribute Book
At 4:45 p.m. on a beautiful Saturday afternoon in January our foundation cracked. We said goodbye to Ada Castro, the woman we called Mom and Oma. Ada’s passing could not have been more loving and peaceful, at home surrounded by Joe, her devoted husband, and all her children and grandkids. She was the soul and center of our world. A beautiful woman with a great sense of humor and never a cruel word towards anyone. As the daughter of Dutch dairy farmers from Bellflower, our mom’s family moved to a Soquel ranch on Porter Gulch Road when she was in elementary school. Her father, Oscar Kasje, owned a feed store in Soquel, her mother, Johanna, stayed home raising Ada and her younger brother, Ted. Back then it was not unheard of for Ada to ride her horse into downtown Soquel. Ada was an athlete, cheerleader and sorority girl at both Mission Hill Junior high and Santa Cruz High School (Class of 1949). This is where she met lifelong friends, having coffee with one of them (Teresa Darling) just days before she passed away. Joe Castro came into her life when, on a dare, he asked her out while the two were skating at the roller rink. They celebrated their 71st wedding anniversary just a few weeks ago. As a young newlywed, Ada worked for County Bank, then stayed home to raise her three children, returning to banking once her kids were older. As a banker, she respected her customers and in return they adored her, some often skipping shorter teller lines to wait to see Ada at her desk. Even with small kids, our mom found a way to give back, volunteering at our schools, at election polling places, staying active in both her work at the Daisy and for Santa Cruz High School Alumni Association. Growing up and raising a family in Santa Cruz was ideal for fun-loving Ada. Between her and her two closest friends, they had a total of 12 kids. She always said they needed a parade permit to get to the beach. As a young family, we spent summers on the road camping in Oregon and Washington and visiting National Parks. When Ada and Joe became grandparents, we spent nearly 20 summers at a lakeside home in Tahoe. Joe and Ada also loved their weekend road trips to Fort Bragg and Cambria, where Ada dragged Joe into every antique store. Our parents also loved hanging out with their regular crew: Wednesday night sailboat races, not on the water, but in front of the Crow’s Nest enjoying cocktails and cheering on their sailing friends, brunches at the Coconut Grove, New Year’s Eve parties where they ate at midnight, and pool parties where someone often got tossed in. Our parents rarely missed a Santa Cruz High School reunion and even into her late 80s Ada continued having luncheons with high school friends including Alma Rogers, Dolly Del Bianco and Teresa Darling. Ada loved gardening, reading, and was a marvelous cook, but at the heart of her life were her kids and grandkids. She and Joe never missed a sporting event, birthday celebration or classroom event. She adored her grandkids, each having a special bond with their Oma. Ada leaves behind her husband, Joe; her son, Steve Castro (Kim); her daughters, Tana Boysen (Neal) and Lori Stewart; her cherished grandkids: Patrick Castro (Cynthia), Whitney Castro (Ian), Connor Castro and Jack Boysen; and hundreds of beloved family members on the Castro side of the family. She is preceded in death by her parents, her brother, Ted Kasje; her son-in-law, Farley Stewart; and her grandson, Nick Boysen. Our mom was the most beautiful, nurturing and generous person we knew, adopting our friends as her own, always including extended family in holiday plans. And despite medical setbacks, she continued to remain active, her positive approach to life never failing her. Due to Covid concerns, a celebration for Ada will be planned later this summer. In the meantime, please raise a glass and toast our wonderful mom and grandmother.
To plant a beautiful memorial tree in memory of Ada Castro, please visit our Tree Store

Look inside to read what others have shared
Family and friends are coming together online to create a special keepsake. Every memory left on the online obituary will be automatically included in this book.
View Tribute Book
Services for Ada Castro
There are no events scheduled. You can still show your support by planting a tree in memory of Ada Castro.
Plant a tree in memory of Ada