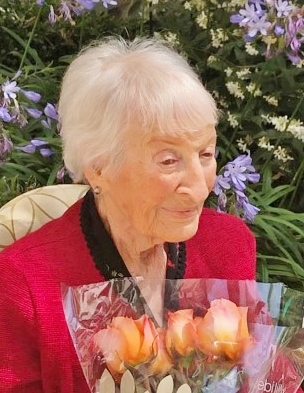 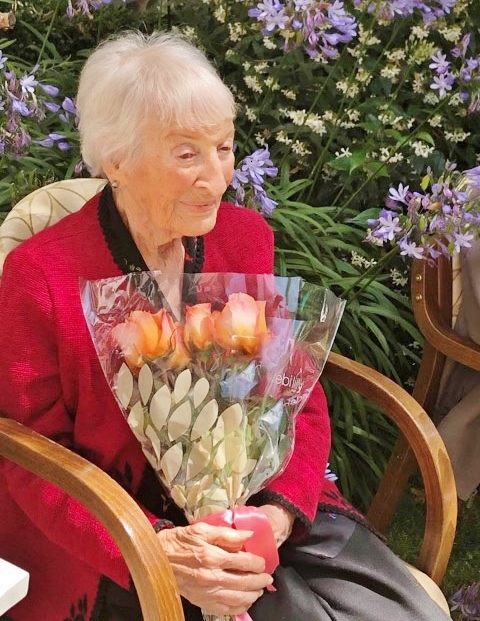 Please share a memory of Emily to include in a keepsake book for family and friends.
View Tribute Book
Emily Stewart was born in New York City on June 28, 1914, the middle child of seven children. Her parents, Salvatore and Francesca Mirachi, were immigrants from Italy. She graduated from Theodore Roosevelt High School in the Bronx, trained in secretarial skills, in 1931. It was during the Great Depression but she was fortunate to find employment, although it was only in the Dictaphone field (during which she won fourth prize in a city-wide contest). In 1937 she married Francis Walker Foye. She finally succeeded in using her secretarial skills. In 1942 she worked at the Emergency Rescue Committee, which was involved in fundraising to foster the efforts of an individual in Southern France to rescue endangered people during the Nazi regime. Her husband joined the Navy in 1943 and was assigned to duty in San Diego, California. She was able to join him there and became employed at Consolidated Vultee Corporation, which built the B-24 Liberator airplane, as secretary to the Plant Manager. After the war, she returned to New York and her husband, who had been out to sea, joined her shortly afterward. She rejoined the Emergency Rescue Committee and was assigned to the American Labor Conference on International Affairs, which had been established for the returned agent (Varian Fry) to meet with international leaders to publish a book of his experience in France. As secretary, one of her duties was taking minutes at their meetings (political, economic, and social). She resigned in 1947 to have her daughter in early 1948 and thereafter remained at home. Her husband became President of the local chapter of a new veterans' organization, the American Veterans Committee, and she joined him as President of the women's group. They were involved in many political and public events in the area. In 1955 she and her husband had a house built in Stamford, Connecticut (in a cul-de-sac) and became involved in the community, enjoying TGIFs on Fridays, after picking up the commuters from New York, by sharing meals (including the omnipresent martinis). Emily assisted in her daughter's school in the classroom and PTA (where she persuaded all the parents to join) and was leader of a Girl Scout troop (at one time taking them to Washington D.C.). When she discovered that the University of Connecticut had an evening branch locally, she enrolled as a Political Science/History major. When her husband passed on in 1962, she returned to the business world as a secretary in the Personnel Department at A.M.F. (American Machine and Foundry) in several different branches, including the Research Division. In 1965, when her daughter graduated from high school, she decided to relocate to California where half of her family now resided. She became employed by the San Jose Community College District as secretary to a Dean, which also involved taking minutes at the Faculty Senate meetings. At one point she became President of the Classified Staff reporting to the Board of Directors. In 1968 she married Peter Stewart. They enjoyed the theater and ballet and took advantage of the many performances locally, in San Jose, San Francisco and the Western Stage. In 1974, when the District built its second campus, she was appointed as administrative secretary to the President of Evergreen Valley College. She retired in 1976. She then began to fulfill her desire to travel beginning with a trip with her husband, a three-month motor tour of Canada and the United States - also travelling to visit her daughter in Central America. She also took many trips abroad, either with her husband or friends, to Europe (where she met her mother's Italian family), Southern Pacific Islands, Asia, Australia and New Zealand. Her family began having reunions every two years, alternately on the East or West Coasts. She also visited the East Coast twice a year in the Spring and Fall to see her daughter, her brother in Maryland, employed by U.S. Navy research and her other brother in New Jersey, a cartoonist for The New Yorker Magazine and many friends from her life in New York, New Hampshire, Connecticut and Long Island. In 1982, she and her husband relocated to Aptos, in Santa Cruz County, where her husband returned to his hobby in the horological field, collecting and repairing watches and clocks. They attended many auctions, sold at antique marts and participated in exhibitions. Emily joined the Women's League of the Santa Cruz Symphony and served in several capacities, including treasurer, arranging previews and fundraising efforts. She was also a member of the local chapter of RPEA (Retired Public Employees Association) and served many functions including President and member of the Board. She also became actively involved in the political field, participating in campaigns and fundraising in local, state and national efforts. For many years, during the annual Summer Shakespeare Festival, she and her husband were part of a volunteer group that aided in auditions, also donating and serving meals during rehearsals. She enjoyed making things, decorating her various homes, entertaining, doing crossword puzzles, playing bridge, gardening, meeting with friends and attending many meetings of various organizations concerned with subjects in which she was interested. She also participated in activities and festive occasions at several senior organizations in the area. In later life, she spent time with friends in their retirement homes, taking them to appointments or entertainment. When her husband became ill in 2010, she was involved in his care. It was necessary to curtail her outside activities - although she continued to volunteer in the Symphony. Her husband died in 2012. She wrote this autobiography just before her 100th birthday. Emily remained in Santa Cruz and passed away peacefully at the age of 107 in the early hours of October 23, 2021 with her daughter, Leslie, and friends, Nancy, Berta and Maura by her side.
To plant a beautiful memorial tree in memory of Emily Stewart, please visit our Tree Store

Look inside to read what others have shared
Family and friends are coming together online to create a special keepsake. Every memory left on the online obituary will be automatically included in this book.
View Tribute Book
Services for Emily Stewart
There are no events scheduled. You can still show your support by planting a tree in memory of Emily Stewart.
Plant a tree in memory of Emily