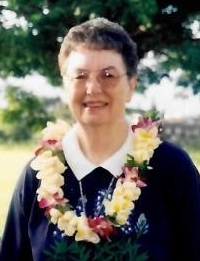 Please share a memory of Janice to include in a keepsake book for family and friends.
View Tribute Book
Janice Vanselus Goody, 85, was born on February 1, 1936 in Santa Cruz, California, the fourth child of Harvey Vanselus and Ruth Reed Vanselus (Wilson). She spent her early childhood years on her parent’s ranch in Patterson, California until Harvey’s heart condition caused the family to return to Santa Cruz where Janice graduated from Santa Cruz High School in 1953. A talented violist/violinist, she enjoyed playing in the high school orchestra, and after graduation, performed with the Santa Cruz Symphony until both kids had arrived. After high school, Janice went to work for Pacific Bell as a Telephone Operator for a few years, and later returned and retired from Pac Bell/AT&T. She met her husband, Ralph Gordon Goody, at the SC Boardwalk where he worked upon returning from his service in the U.S. Air Force, and before beginning his career in 1954 as a Journeyman Printer for the Santa Cruz Sentinel, where he worked until retiring in 1992. They were married on June 10, 1955 in Santa Cruz. The family moved to Capitola after their second of two daughters was born, and in 1961 they moved across the street to the newly built family house on Oak Drive that was her cherished home for 57 years, until moving to Southern California to be closer to family. Janice was a talented seamstress, and she created wonderful outfits for the kids, and beautiful music recital and concert performance dresses. She also had a lifelong passion for knitting and crocheting and enjoyed giving many of her beautiful creations to family and friends as gifts for various life events. Her afghans and sweaters won many awards (including Best in Show) for several years at the Santa Cruz County Fair and one year at the California State Fair in Sacramento. One of the things she loved the most was traveling around the U.S. with Ralph, until he passed away in 1997. Their goal was to visit all of the 50 states, and they made it to most of them. They would often plan where they would end up each evening with a hotel confirmation (Janice insisted) but always left time for the interesting side trip off the beaten path. After Ralph passed, Janice remained very active, and enjoyed volunteering at the Santa Cruz High School Alumni Association. She was also an avid genealogist, who delighted in tracing her ancestry, especially the Scottish lines. She had a passion for all things Scotland. She devoted many hours to the Family History Center of The Church of Jesus Christ of Latter-day Saints, where she was an active member. Janice passed away on May 10, 2021 at her care facility in Long Beach, California, where she spent her last few years, but she always considered Capitola as her “own little piece of paradise.” Janice is preceded in death by her husband of 42 years, Ralph Gordon Goody, sisters Helen Vanselus, Margie Borges, Marion Vanselus, and granddaughter Crystal Dawn Jones. She is survived by daughters Suzanne Arlene Corley of Carson, CA, and Sheila Carole McCallum of Liberty Lake, WA, great-granddaughters Sierra Dawn and Cheyanne Lynn Jones of Carson, CA, niece Bonnie Van Heyningen of Lakewood, CA, and other numerous nieces and nephews. Graveside services will be held at Oakwood Memorial Park, 3301 Paul Sweet Road, Santa Cruz, CA on Tuesday, May 25th at 10:00 AM.
To send flowers to the family or plant a tree in memory of Janice Goody, please visit Tribute Store
Tuesday
25
May