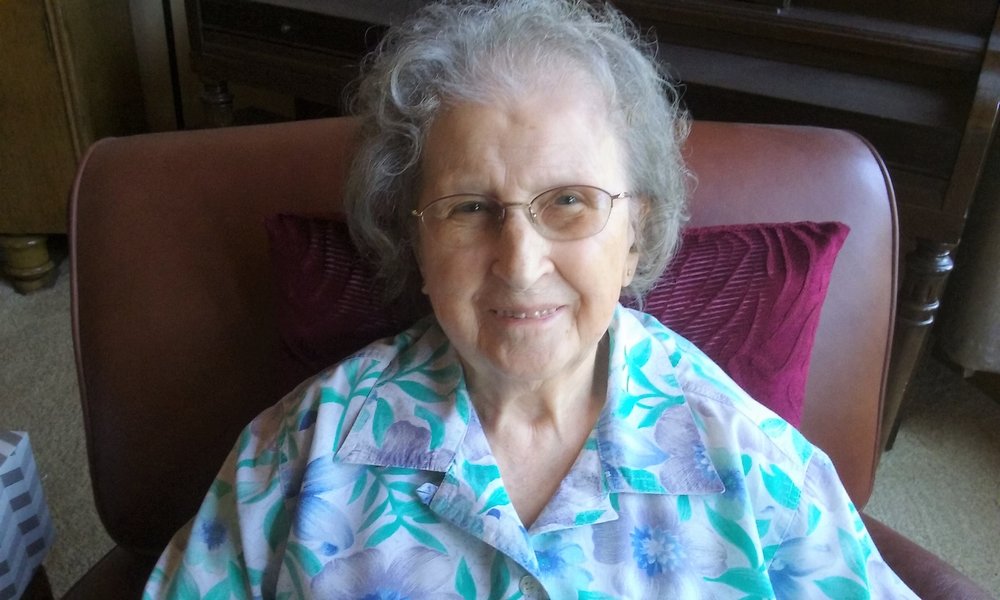 Please share a memory of Miletta to include in a keepsake book for family and friends.
View Tribute Book
On Dec. 29, 2020 and after over 100 years on this earth, Mel Fandrich entered her Forever Home and heard the Lord say, “Well done, thou good and faithful servant.” Mel was delivered by a North Dakota mid-wife to immigrant parents, Molly and William Rauser on Dec. 14, 1920, the oldest of three daughters (2 sons died in infancy). She has been reunited with her sister, Stella Adam, and survived by her sister, Lorraine Gravens. Being the oldest, Mel worked the farm with her dad, rounding up the cattle on her horse, Fanny, milking the cows, pitching hay, driving the horses on the hay baler and stacking the bales with her sister, Stella. It was a hard life, but as Mel said, ”…a good life”. They were poor but didn’t realize it because all their neighbors were in the same boat. She met her husband, Reuben, in North Dakota as a 13-year-old teenager, with Reuben telling his brother that, “One day I’m going to marry that girl.” But sparks didn’t fly until they were reunited in California a few years later. Mel’s family moved to Elk Grove, CA in 1938 and began attending the church her Uncle Gus pastored. It was there, during Sunday night service, that Mel and Reuben reconnected. They were married July 4, 1940, the same date as Mel’s parents. Life’s adventures continued with the birth of son, Ron, in 1941 and daughter, Gerry, seven years later. Mel was a devoted mother and working mom, starting as the first telephone sales rep for Sears in small town Lodi, CA. Years later she became the first woman to work in the Sears Parts Department in Stockton, CA. A life-long believer and strong woman of faith, Mel was an active member in Lodi First Baptist Church and later Temple Baptist (now Grace Point). She sang in the church choir (along with Reuben), taught Sunday school, participated in the ladies aid groups and helped in the nursery. As years passed, Mel and Reuben retired, opening up opportunities for travel to visit family and friends. Numerous trips were made to Southern Ca., Portland, Or., and Washington state. Two tropical vacations were spent in Hawaii visiting sister Lorraine, who lived there at the time. Many trips were made to visit family and dear friends in North Dakota, allowing time for reminiscing and sharing memories. Mel devoted herself to her first love, Reuben, all her life and tenderly cared for him for many years during his battle with Alzheimer’s. After Reuben’s passing, she moved in with daughter, Gerry, and son-in-law, Steve, and settled in the beautiful Santa Cruz Mountains for the remaining 10 years of her life. She was a member of Santa Cruz Community Church and the Scotts Valley Senior Center. Mel led a wonderful 100-year-long life complete with love, joy, adventures and the occasional heartaches. The Lord has been good to her and allowed her to share her love, warmth, laughter and faith with all those her life has touched. Mel is survived by sister, Lorraine Gravens, of Hidden Valley, CA, daughter-in-law, Ellen Fandrich, of Casa Grande, AZ, grandson, Todd Fandrich, of Maricopa, AZ, great-granddaughter, Madeline Fandrich, of Portland, OR, grandson, Jason Fandrich, of North Hollywood, CA, granddaughter, Kerry Hansford, of Reno, NV, great-grandchildren, Carson, Braden and Alexis Hansford, and daughter, Gerry Rieger, of Santa Cruz, CA who loves her mother dearly. Donations can be made in Mel’s name to Hospice of Santa Cruz (www.hospicesantacruz.org) or your local hospice organization.
To plant a beautiful memorial tree in memory of Miletta Fandrich, please visit our Tree Store

Look inside to read what others have shared
Family and friends are coming together online to create a special keepsake. Every memory left on the online obituary will be automatically included in this book.
View Tribute Book
Services for Miletta Fandrich
There are no events scheduled. You can still show your support by planting a tree in memory of Miletta Fandrich.
Plant a tree in memory of Miletta

Share Your Memory of
Miletta
Upload Your Memory View All Memories
Be the first to upload a memory!
Share A Memory
Plant a Tree