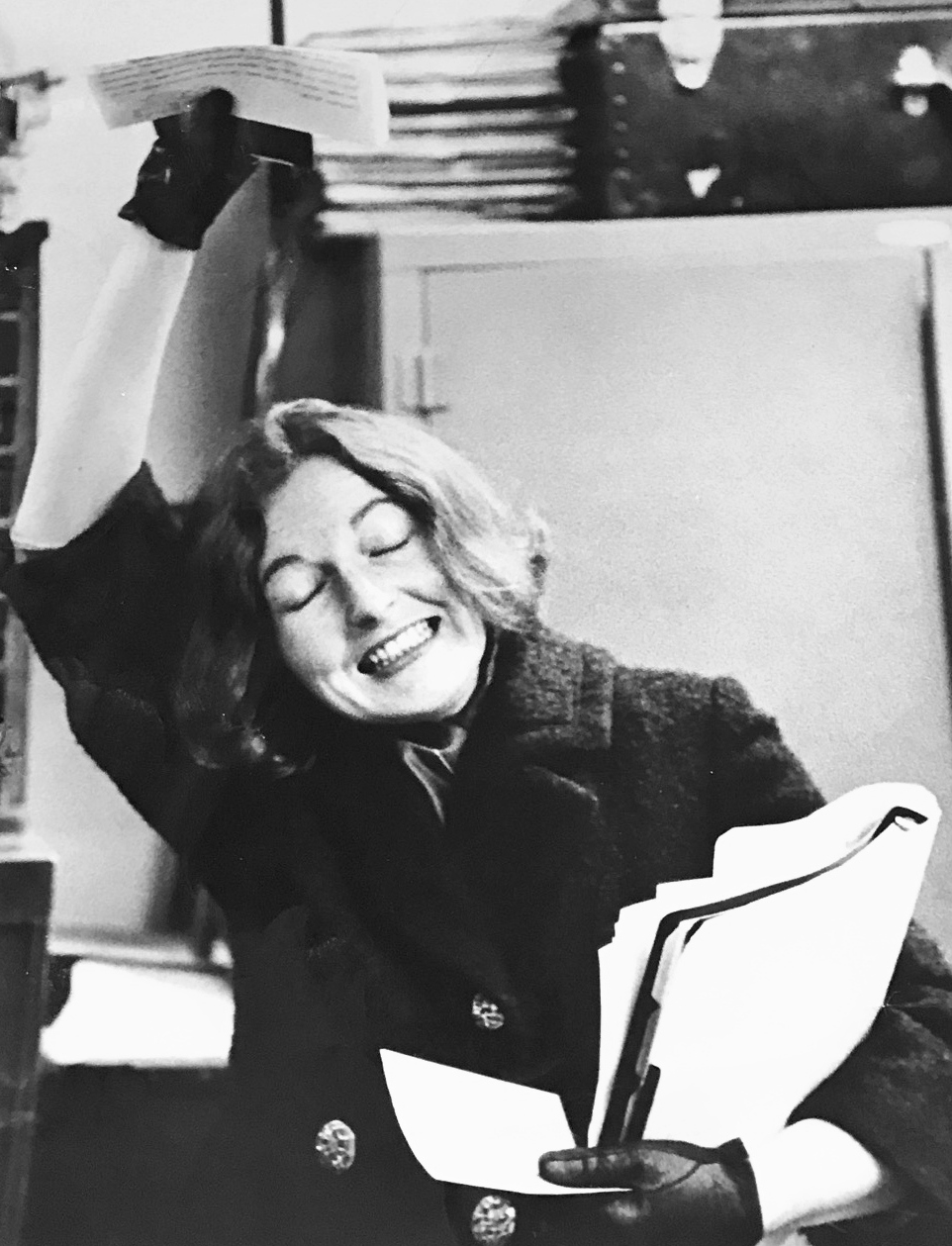 An eighty-five-year-old woman passes by you in a 1984 Volkswagen bus, in its original condition, filled floor to ceiling with camping gear as she makes a 1,225-mile trip from Santa Cruz to British Columbia to visit relatives. She sees you through Coke bottle glasses, and sporting short, unruly gray hair, waves hello. She'll stop at RV parks along the way and sleep in her fully customized van. On this trip, she arrived well after dark to an RV park, and later said, "I was very lucky. When I awoke in the morning, my van was inches from the lake!"  That woman is my aunt, who we affectionately called Aunt Jo. My aunt, Joan Ward was an independent woman, who was generous, fun, adventurous, intelligent and humorous. The trip to Canada in her 80's exemplifies my aunt's life. She enjoyed traveling on her own, taking to the road and learning about new places and meeting new people. She quietly passed away at 90 years of age on October 19, 2019.

At a time when women were not encouraged to pursue careers, my aunt graduated from Stanford University with a degree in journalism. She made lifetime friends there with Joannie Weir and Patty Kreigler. After graduating, she left to live and work in Switzerland, then did public relations work for the 1960 Olympics in Squaw Valley; she worked for the Mark Hopkins Hotel in S.F. and for KQED channel 9 in S.F. From 1966 until 1992, she worked at UCSC in Public Relations as a journalist and photographer, a career she was most proud of. She was a prolific reader and collected hundreds of books on a wide variety of subjects. Aunt Jo could engage in discourse about almost any subject with insight and humor.

She was born to George Frederick and Jean Creischer McKay on August 21, 1929, in San Mateo, California. That same year the San Mateo bridge was completed and the Golden Gate Bridge was still under construction. Aunt Jo's parents met in San Francisco and had a connection by both being natives of Canada. They settled in San Mateo and had two daughters, Margaret and Joan. There was open land in San Mateo, and many wealthy San Franciscans were building homes there, my grandfather, a carpenter, built many of them. My grandmother worked as a secretary in S.F. This was during the Great Depression, at a time when men would walk up to the back door of my grandparents’ home asking for work in exchange for a meal. Living during the Depression, Aunt Jo understood hardship and led a life of giving back and helping others. In the 1960's she spent two years in the Peace Corps in Ecuador. She became fluent in Spanish and established a small business where women in Ecuador could sell hand woven wool sweaters in the U.S. (For many years, we all could count on receiving an alpaca wool sweater at Christmas!) She generously donated to many national and local non-profits. She understood the importance of community and supporting institutions that benefit the public good. She was equally generous with us, her nieces and nephew, introducing us to opera, symphony, ballet and travel through Europe. Christmas holidays were special with trips to Sausalito, San Francisco, Monterey Bay and Santa Cruz.

Aunt Jo was an amateur genealogist traveling as far as Scotland to obtain gravestone rubbings of ancestors, and collecting all letters and memorabilia of family members. She never threw a letter away.

She is survived by her nieces, Janet (Herbert) Brooks, Robin (Javier) Rafael, Nancy (Paul) Cowie; nephew, John Huffman; grand-niece, Katie Cowie; grand-nephews, Kevin and Ryan Cowie, Tyler Brooks, and Drew and Nicholas Rafael; and relatives in England, Scotland and Canada. She will be greatly missed by those she loved and who loved her.

Family and friends are invited to attend a celebration of her life on Friday, November 29, 2019 at 1:00 p.m. at the Skylawn Funeral Home and Memorial Park on Highway 92 at Skyline Blvd. in San Mateo, California.

Share Your Memory of
Joan
Upload Your Memory View All Memories
Be the first to upload a memory!
Share A Memory
Plant a Tree