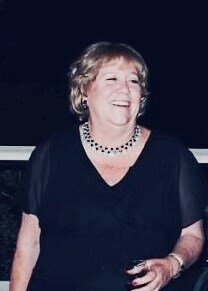 Please share a memory of Susan to include in a keepsake book for family and friends.
View Tribute Book
Susan Patricia O’Neil was born in Providence, RI on New Year’s Day in 1949. As a military family growing up, there were at least 11 new houses over 22 years, with her dad gone for 10-month long carrier deployments. During that time, Sue fine-tuned her list making abilities, running a tight ship around the house, and being the overall boss to her siblings. While Sue had the choice between east and west coast colleges, with her dad being assigned to the Pentagon, she set off to attend college at the University of Maryland. It was there that she met a senior offensive lineman on the football team named Fred and a meandering courtship followed. After Sue had graduated and returned to San Diego, Fred proposed over the phone on July 4, 1971. Lucky for all she said yes and they were wed on October 10, 1971 in Newark, New Jersey. Fred and Sue were a supportive team, quick to laugh with each other and at each other, for just shy of 50 years. Work and family took them first to San Diego and then to San Jose, where they settled until 2005. Once their kids were all in school, Sue pursued what she always had planned: going back to school to become a teacher. For those lucky enough to work with her or see her in action, you knew she was innately gifted with kids. She worked for Oak Grove School District for 17 years, most of her time spent at Stipe Elementary. She went back to get advanced certification to become a reading specialist, working with first graders. Just as she was retiring, they decided to take the leap and buy a yet-to-be-built house in Santa Cruz. New kitties and grandchildren joined the family, and both became loves and passions for Sue. Retiring but never slowing down, she always had a project going, a classroom to help out in, or to volunteer as a docent at Seymour Marine Center in Santa Cruz. Sue passed away suddenly with her three kids and beloved husband by her side. She was often fond of saying “we’re making memories,” and we’re all so thankful for the memories and experiences we have with her. Sue was preceded in death by her parents, Tim and Rita O’Neil. She is survived by her husband, Fred, her children, Matt (Hope), Kim (Doug) and Craig, grandchildren, Spencer and Megan, and siblings, Jan, Paul and Dick (Audrey). The family kindly asks that donations be made to Planned Parenthood in Sue’s memory.
To plant a beautiful memorial tree in memory of Susan Gawlick, please visit our Tree Store

Look inside to read what others have shared
Family and friends are coming together online to create a special keepsake. Every memory left on the online obituary will be automatically included in this book.
View Tribute Book
Services for Susan Gawlick
There are no events scheduled. You can still show your support by planting a tree in memory of Susan Gawlick.
Plant a tree in memory of Susan