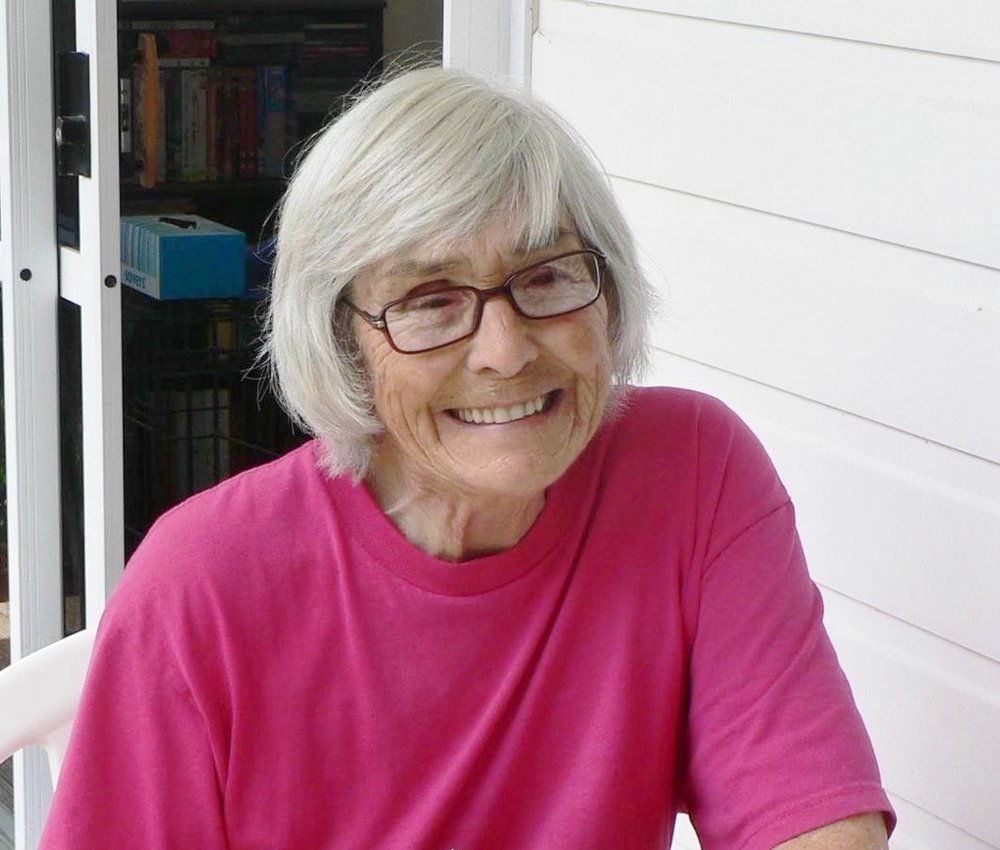 Susan Callahan Champness, a unique, free-spirited lady, passed on to her next adventure with family by her side on August 17, 2019. She was 83.
Born Margaret Susan Callahan in Seattle, Washington, Sue’s parents were Charles Preston Callahan of New Zealand and Margaret Latimer Callahan, a descendant of one of Seattle’s Pioneer families (Denny/Moore). Raised in Seattle with her older brother Charles Latimer Callahan at the Three Tree Point family home, Sue attended Highline High School and Annie Wright Seminary. She graduated from the University of Washington with degrees in Art and Education.
After her marriage to Larry Gray ended, Sue moved with her young children to Ben Lomond, California in 1966. Sue began her teaching career at Natural Bridges, then Quail Hollow Elementary School where she taught for over 10 years. She also taught Special Education classes at San Lorenzo Valley High School. Her final classroom assignment was abroad at the International School of Trieste in Italy. After retiring from teaching, Sue worked at McGraw-Hill Publishers in Monterey as an editor and proofreader up through the 90’s.
Sue was a devoted single mother and quiet feminist when she saw the need for change. She was a team manager for her son's Little League team, a rare occurrence for a woman at the time. In addition, she was instrumental in starting the San Lorenzo Valley’s first softball league so her daughters could play and coach. While her daughters' horses were boarded at the Chaparral Corral, she could be found feeding, cleaning stalls or mending fences along with her neighbor, the beloved Roberta Patterson (also a single Mom), whom she supported to become the Chaparral Corral's new manager.
Later, she moved to Santa Cruz to be with then husband Don Champness, a real estate agent. They became involved with fixing up and selling homes. Sue became a self-taught, “do it yourself” home renovator. She painted, patched, sheet-rocked and even “one by one” laid her brick driveway at her home. Everyone was welcome into Sue’s home where she loved to tell her stories, work on her projects and garden in her yard.
Over the years, Sue was happy sewing on her foot-treadle 1910 Singer sewing machine that she inherited from her grandmother, making her renowned jackets, pillows, etc. She even sewed costumes for various theatre groups in Seattle and Santa Cruz.
Sue loved researching her New Zealand and Pacific Northwest family lineage that was intertwined with a rich legacy of history in the Northwest. Her maternal great-grandparents Norval Hastings Latimer (Early President of Seattle First National Bank - later named SeaFirst) and the matriarch of eight, Margaret Moore, were from the original founding families of Seattle. Her paternal grandmother, Susan Wagner, started the famous Wenatchee Apple Blossom Festival in 1919 and was just honored during this year’s 100th year anniversary celebration.
Sue's adventures consisted of many family road trips from California to Seattle in the family wagon, then later in her VW Vanagon with friends, even adventuring down to Mexico on a surf trip with her son.
Sue was a trooper. While in her 60’s she donned water skis and snow skis to join in the fun with her kids and grandkids. There were also a few trips to New Zealand to see relatives. At 69, she joined The Red Cross and went to the South to help the Hurricane Katrina victims.
Our smiling rebel will truly be missed. Sue is survived by her son Ryan (Lisa) Gray of Santa Cruz, CA, daughters, Anne Barber of Tennessee, Julia (Eric) Abramson of Mill Valley, CA, Dana (John) Parker of Santa Maria, CA, her grandchildren, Dianna, Mariah, Rachael, Brett, Mitch, Lance, Beau, her great-grandchildren of Tennessee, the various nieces, nephews and cousins of the Callahan clan along with relatives in New Zealand, including devoted cousin Mark Farnham, as well as local best friend Anne Morrison who will also miss sharing travels, coffee and “ciggies” with Sue in her garden. She was preceded in death by her brother Charles Callahan and both former husbands, Larry Gray and Don Champness.
A “Garden Party” in memory of Sue will be held in her backyard on Saturday, September 28, 1 PM - 3 PM. We will have a memory planting in her honor. Please come by with a plant, a rock and/or a “Sue” story to share.

Share Your Memory of
Susan
Upload Your Memory View All Memories
Be the first to upload a memory!
Share A Memory
Plant a Tree