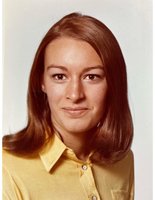 Nina Anne Valchar died at her home on Easter Monday, April 5, 2021 in Santa Cruz, CA. Nina was born in Jamaica, Queens, NY to George and Mary Louise Valchar. She was the third of six sisters. The family left their home on Long Island to move to Argentina, and later Europe, living in Germany and Sweden. As a young adult, Nina returned to live with her beloved Nonna and family in Indianapolis, IN. Nina left Indiana and traveled across the country, landing in Denver and backpacking her way through the southwest from the San Juan Mountains to Mt. Whitney and Yosemite. She landed in Santa Cruz and never left. Nina was a fighter. After an injury in her early 20s, she met her conditions with courage and a relentless spirit until the end. Nina held loved ones in her heart and mind. She often reflected on past conversations and visits, and relished her time with family, friends and those who helped her along the way. Nina was an avid writer, reader, grammar and word aficionado. She loved music, cooking, history, the outdoors, walking, and enjoyed having late nights with her friends -- the sea, the stars and the moon. Nina is survived by her sisters Lillian, Marian, Deborah, Gina, Claudia, and her father George. She is survived by her two children, Nicholas and Elizabeth, as well as her two grandchildren, Aubrey and Isla. She is preceded in death by her first-born daughter, Megan, and her mother. Due to COVID-19, the family will be scheduling a memorial at a later date.