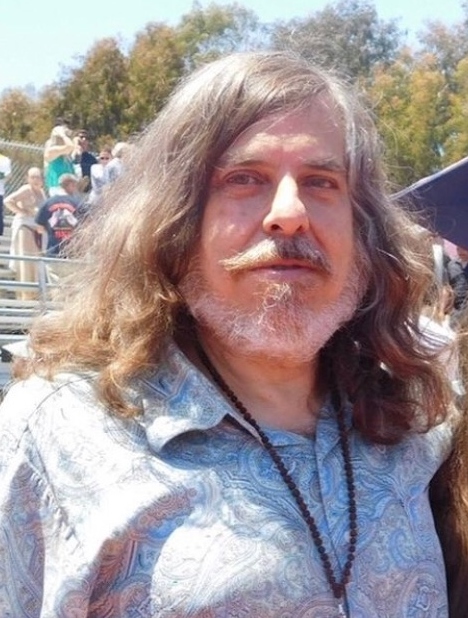 Dr. Randy Baker, 65, of Soquel, California, passed away suddenly on Thursday, April 8, 2021 after recently undergoing heart surgery. Randy was born on June 18, 1955 in Chicago, IL to Audree (Vision) and Sidney Rubin who passed away in 1958. Randy was also preceded in death by the only father he ever knew, Chester Baker (May 1998). Randy graduated with honors from Valparaiso High School in 1973. While in high school Randy played drums in the band and his love of music developed. The whole family had to go into silent mode while Randy was recording albums night after night. Randy attended Stanford University where he continued to excel academically and musically. Randy was a drummer in the Leland Sanford Marching Band where he was known for wearing a big red sombrero. Randy also wrote for the Stanford Newspaper reviewing concerts and albums. He began to meet and interview some famous musicians. Randy graduated Stanford in 1977 with honors and was accepted to the University of Michigan Medical School. While in medical school, Randy continued to perform at the top of his class academically. Randy graduated with honors with a degree in Internal Medicine/Family Practice. He also kept up his passion for music and became interested in meditation and holistic medicine. Upon his graduation from medical school, Randy settled in Santa Cruz and started his medical practice, The Pacific Center for Integral Health. Randy was always curious and wanted to learn more than traditional medicine so he studied homeopathy. He always looked for the best way to treat patients using the best of Eastern and Western medicine. Randy was named numerous times as the most popular doctor in Santa Cruz. Randy was never too busy to help a patient- even making house calls, seeing patients in the middle of the night and answering phone calls at all hours. His patients knew Randy would always be there for them. One of Randy’s favorite patients was Jerry Garcia. Not only did they share a doctor/patient relationship, but Randy and Jerry became friends. Randy began following the Grateful Dead in the mid 1980’s and met his future wife, Jody, who was also a Deadhead. Randy and Jody married in 1998. Jody, sadly passed away in 2015. They leave behind daughters, Rumiana and Naialuna. Randy is survived by his loving mother, Audree Baker, and his sisters, Abby (Sheldon) Kail and Eden Tallman. He is also survived by his beloved friend, Lindsay; his caring sisters-in law, Susie Cantor, Marcy (Mark) Grantor, Nancy Cohen-Vardy, and Wendy Vandergrift; and his mother-in-law, Barbara Cantor. Randy is also survived by many loving nieces and nephews who will miss him: Allison (David) Templer, Ben (Ashley) Tallman, Shayn (Stephanie) Kail, Sam Baker Tallman, Chester Tallman, Justin and Julia, Audrey, Ari, Moriah, Dafni Moon, Ruby and Mia, Malia and Marley, Micha, Coby, Ariel, Raviv, Archie and Jones. Randy had smile that lit up a room. He had a passion for life and listening to live music and dancing was his favorite pastime. He had friends all over as he always engaged everyone he met. Randy loved watching the sunset almost every night and shared his pictures for everyone to enjoy. Randy will be missed by his family, his friends, patients, and all who knew and loved him. Randy is what life is about. He left his mark and touched so many lives. He gave unconditionally. He was one in a million. In lieu of flowers, donations can be made to the GoFundMe account for the "Randy Baker Memorial Fund" created to raise money for Rumiana and Naialuna's college fund (www.gofundme.com/f/randy-baker-memorial-fund). A Zoom Memorial will be held on Monday, April 12, 2021 at 7:00 PM. To attend please go to: https://us02web.zoom.us/j/85871970060