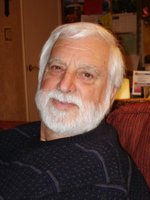 I am simultaneously heartbroken and joy-filled to announce the passing from this world of DAVID DIPIETRO WEISS – a much-loved individualist teacher-educator –activist and father who was my soul-mate, best friend, and husband of 14 years. David was born with only one functioning lung and only one kidney and endured a series of health challenges during the years we were together. On the morning of Christmas Eve, he walked into a medical clinic for a routine appointment, collapsing just inside the entry door where his heart stopped and attempts to revive him failed. Despite my shock and surprise at the way he left, I am happy to report that David “appeared” to me shortly thereafter in the form of his spirit-being, soaring in a place of pure joy. Later that day, I watched as he ascended into a realm of light where he was welcomed with great fanfare by his mother Eleanor (Helen) Margarita DiPietro Weiss, his father Frederick Weiss, brother Fred Arthur Weiss, and numerous other members of the Weiss and DiPietro clans. David is now cavorting with a host of his guy pals in the spirit world, including Jack Fallows (Spirit Temple builder), Ron Meadow (men’s group member), Ralph Peduto (friend), Isamu Furuichi (friend and husband of Billie), Larry Wahl (River Sanctuary Publishing author and friend), crystal healing master teacher DaEl Walker, and of course Dave Schumacher (longtime friend and co-conspirator). As described by David in his essay Rebirthing Into Spirit (riversanctuarypublishing.com/voicesfromwithin1), his was a blessed and bliss-filled passing. The message David wishes to leave with us is – THERE IS NO DEATH. David’s accomplishments include. . . MS in Political Science with minor in History and Russian from San Jose State University; Bonny Doon Elementary School District Superintendent and Principal; SLV Middle School and SLV High School teacher, Principal and alum; creator and leader of California Field Studies (a year-long field-based program for high school students); park ranger at Loch Lomond; Executive Director Monterey Bay Regional STC (School To Career) Partnership; 11 years on Cabrillo College Board of Trustees; creator of Your Future Is Our Business (YFIOB) – a non-profit which connects young people with careers; co-creator and CFO of River Sanctuary Publishing; author of 9 books – 2 fiction, 6 spiritual books, and a memoir completed in 2020! A recently completed work of historical fiction will be published posthumously. Add to that, the onetime owner of The Toll House, and for several years The Trout Farm Inn, as well as playing Tevye in a legendary SLVHS rendition of Fiddler on the Roof (directed by Ardeth DeVries). David and his first wife, Susan Bowers Weiss, are the parents of beloved sons Sean (wife Heather, children Melanie, Samantha, McCain) and Matt (wife Amy, children Daegan and Matt Jr.). He is survived by his brother Danny and sister-in-law Irina, nephews Elusha and Joshua, beloved cousins Les and Ken Wright and Jeri (on the DiPietro side) and a host of cousins and family on the Weiss side. David and Annie Elizabeth Porter met in 2004, marrying and moving to Felton in 2006. Together we purchased a magical property at the spot where Fall Creek empties into the San Lorenzo River. After we both retired from our careers in 2009, the property – named The River Sanctuary – spawned the creation of River Sanctuary Publishing, becoming a hub for small groups to gather and explore spiritual teachings through books, films, and other activities. In 2013, David had a vision and got a crew together to build the Spirit Temple at the Sanctuary as the space for hosting these gatherings, which expanded to include numerous spiritual approaches, healing modalities, and sacred ceremony. David’s special loves include… the hot tub; baseball; keeping up with the news; singing little ditties and songs of his youth; his dog-pal Yoki (and all the dogs throughout his life!); sitting in the sun on the patio; regaling friends and family with tales of his life; watching Netflix historical and romance movies with Annie; managing our finances; the ocean, forest, creeks and rivers of this area; the bird visitors to our little sanctuary; writing and creating books. To this multi-faceted, kind-hearted, generous man I say “thank you” for partnering with me to create the life I enjoy today in the beautiful gardens of the Sanctuary, with German Shepherd Yoki by my side. My sons Derek and Markos are forever grateful to David for the love, guidance and wisdom he shared with them. David Weiss is gone from this Earth, freed from this body, dearly missed by those whose lives he touched. His memory lives on through his legacy of love. ------------------------------------------------- To see some heartfelt notes from those who knew David at SLV high school, visit the SLV Memorial Facebook page where his son Sean posted a photo and a note. Copies of his memoir and other books are available on our website: riversanctuarypublishing.com (enter David Weiss in the Search products box…) If you would like to make a donation to further work that David started, consider donating to the non-profit Your Future Is Our Business (visit https://yfiob.org/join-us/#donate) or mail a check to Your Future Is Our Business, 400 Encinal Street, Santa Cruz CA 95060. Cards or notes of condolence may be mailed to P.O. Box 1561, Felton CA 95018.