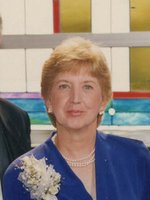 Kathleen Jewel Harn passed away peacefully on Friday, December 4, 2020, at the age of 82. Kathy was born in Sacramento, California, and relocated to the Santa Cruz area as a child. She met her future husband, Ken, while attending high school. They were married in 1962, and later had two sons, Steve and Scott. The family moved to Concord and Kathy set aside her career to focus on raising her sons during their early years. Eventually she returned to work as a bank teller. Ken and Kathy made a career change in 1979, taking over her father’s magazine business and the family returned to the Santa Cruz area. Kathy enjoyed camping, water skiing, cooking, traveling and spoiling her family. Her family agrees the best word to describe Kathy is “selfless,” taking care of their needs before her own, whether it was preparing middle of the night dinners for Ken during his graveyard shifts or 4AM breakfasts for her boys before a fishing trip. She lovingly cared for Ken through his battle with Alzheimer’s, even at the expense of her own health. Kathy adored her family. She loved to listen to them swap stories around the dinner table, teasing each other. She cherished her relationship with her sister Marian; they were as close as two sisters could be, meeting weekly for lunch or a trip to Gottschalks. Her boys, Steve and Scott, were her pride and joy, and both took amazing care of her before and especially after Ken’s passing. She lovingly accepted her two daughters-in-law, Michele and Sally, as if they were her own daughters. She was loved by all her grandchildren and looked forward to meeting her first great grandson. Kathy will be missed by many of her wonderful friends. She especially treasured her friendship with Ed and Emily Kriens and their late-night ping-pong tournaments in the garage, and with Jim and Carla Nunes, vacationing and cruising to several foreign destinations. Kathy is preceded in death by her husband of 58 years, Ken, and her parents, Herb and Jewel Reid. Kathy leaves behind her beloved sister, Marian Reid, her two sons Steve (wife Michele) and Scott (wife Sally), seven grandchildren (Seven, Alyssa, Mallory, Riley, Breanna, Bianca and Alyssa Rose), and one great grandchild, Owen Kenneth Harn. Kathy, mom, grandma, and friend, you will be forever loved and dearly missed. May you rest in peace.