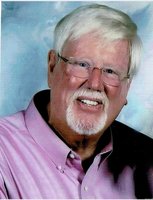 Kindness, compassion and generosity were the hallmarks of the life of Charles H. Bergtold, who died unexpectedly at Dominican Hospital in Santa Cruz on November 18 at age 76. He was a big man with a big heart who will be sorely missed. Chuck was born in Oakland, California, on February 24, 1944, where his father was employed with a ship building concern assisting the government during war time. At the age of five he moved with his family into a new house on the Los Gatos ranch his family had settled in 1922. Chuck’s grandparents, Charles and Louise Corkill Bergtold, had named their idyllic acreage Placer Oaks Ranch. They built an early Los Gatos dairy on their land, overlooking Los Gatos Creek. Chuck often recalled his childhood as an especially happy time, growing up on the ranch with his brother Phil and attending frequent family gatherings and barbeques held under blossoming fruit trees. Chuck attended University Avenue Grammar School and graduated from Los Gatos High School with the class of 1962. He was 16 years old when he began to collect vintage cars, a habit which lasted all of his life. One of his first purchases was a Model T truck which didn’t run, but his parents, Lyman and Marmion Porter Bergtold, were tolerant of whatever he had towed to the ranch, since there was plenty of room. Another memorable early acquisition was a1928 Packard in pristine condition, which he had saved up $500 to buy. In more recent years his love affair with Packards continued, but he also owned woodies, and participated in the annual summertime Woodies on the Wharf in Santa Cruz. After high school, Chuck attended community college and enlisted in the Naval Air Reserve, based at the Naval Air Station in Alameda. In those early years of the Cold War, his job was to sit in the nose cone of a P2V aircraft while on patrol for Russian submarines. On many weekends he operated magnetic anomaly detection equipment from his forward observation bubble. Chuck had a fondness for large machinery, and a love of all things trains. As a railroad enthusiast he rode them, watched them, studied their history, and collected railroadiana, including photographs, lanterns, headlights and other artifacts. He bonded with his son Brian over their mutual interest, and they enjoyed visiting the great railroad locations of the west. He particularly loved seeing restored locomotives of his youth steaming through the modern countryside. Many Los Gatans will remember Chuck for his antique store, which operated out of his historic building on West Main Street, the Fretwell Block, for 35 years. His business flourished at a time when Los Gatos was known as a destination for antiques. He loved his work, enjoyed talking to his customers, and continued to collect and sell historic memorabilia even after he retired in 2005. He was a fount of information on the history of the town of Los Gatos and the surrounding area. For a number of years he was a member of the History Committee at the Museums of Los Gatos, helping to mount exhibits and contributing artifacts from his own collections for the community to enjoy. Some may also remember Chuck’s maternal grandparents, Harold Porter, DDS, and his wife Hazel. Dr. Porter was a well-liked dentist and amateur painter of note whose office was located for years in the old Beckwith building. Chuck is survived by his wife, Peggy Conaway Bergtold and his son Brian C. Bergtold, both of Santa Cruz, his brother Philip Bergtold (Gloria) of San Jose, his step daughter, Anne Conaway Peters (Troy) and his grandchildren Ronnie Peters and Max Peters, of San Antonio, Texas, and two cousins, Suzi Reed Bower and Leslie Reed Gordon. He was predeceased by his first wife, Constance Wohnert Bergtold (1944-1998).