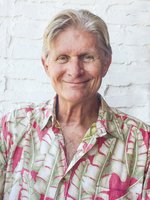 Ron Bengston died peacefully at his home in Davenport, CA on May 24, 2020 with loving family and friends at his bedside. The multiple myeloma that he battled (mostly successfully) for 15 years finally won the war. He was 76. Ron was born on December 29, 1943, in Vancouver, Washington to Carl and Virginia Bengston. Ron’s family moved to Grants Pass, OR in the early ‘50’s and then to Santa Cruz in 1958, where Ron immersed himself in the California coastal lifestyle. He was an Eagle scout, a certified swimming instructor who taught legions of Santa Cruz kids to swim, and he graduated from SCHS in 1962; where he played football and basketball and was the Senior Class President of the largest SCHS graduating class ever. He kept in touch with many of his classmates for the rest of his life. Ron attended Cal Poly College in San Luis Obispo and graduated with a Bachelor of Architecture Degree in 1970. He worked for architectural firms in New York and Santa Cruz after graduation, but he preferred having his own business. His “Pen and Hammer” Design and Construction Services resulted in fine custom workmanship throughout the area. Married briefly twice, Ron was a bachelor most of his life. His days were rich and full of adventures, experiences and travel, including two stints in the Peace Corps in Latin America. A “renaissance man”, he loved the ocean, animals, birds, architecture, history, flowers, photography, the 49ers, found objects and projects of all kinds. Ron was a big man with a big personality who was a fixture in Davenport. He lived in his New Town cottage for over 40 years where he was known for his strong opinions, his sarcastic humor and his garage full of tools, which the neighbors affectionately called “Ron’s Hardware Store”. He was devoted to his many friends and his extended family, to whom he was variously known as “Alto Ron”, “Davenport Ron”, “Ron Dawg” and “Uncle Ronny”. Ron was preceded in death by his parents, his brother Bob and his first wife Stephenie. He is survived by his sister Nancy (Bob) Emerson, nieces and nephews Wendy Gregory, Cyndi (Travis) Cooper, Brian (Janet) Bengston, Kevin (Christine) Bengston, Amanda Emerson, Michael Emerson, eight grand and great-grand nieces and nephews, his second wife Joan Spicer, special friends Rocio Gisela Uriarte, Jeanne Thomas, Yolanda Blondeau, and dear friends among his former clients and his SCHS, Peace Corps and Davenport communities. His family suggests that contributions in memory of Ron be made to Pacific Elementary School in Davenport, Hospice of Santa Cruz County or the SCHS Alumni Association.