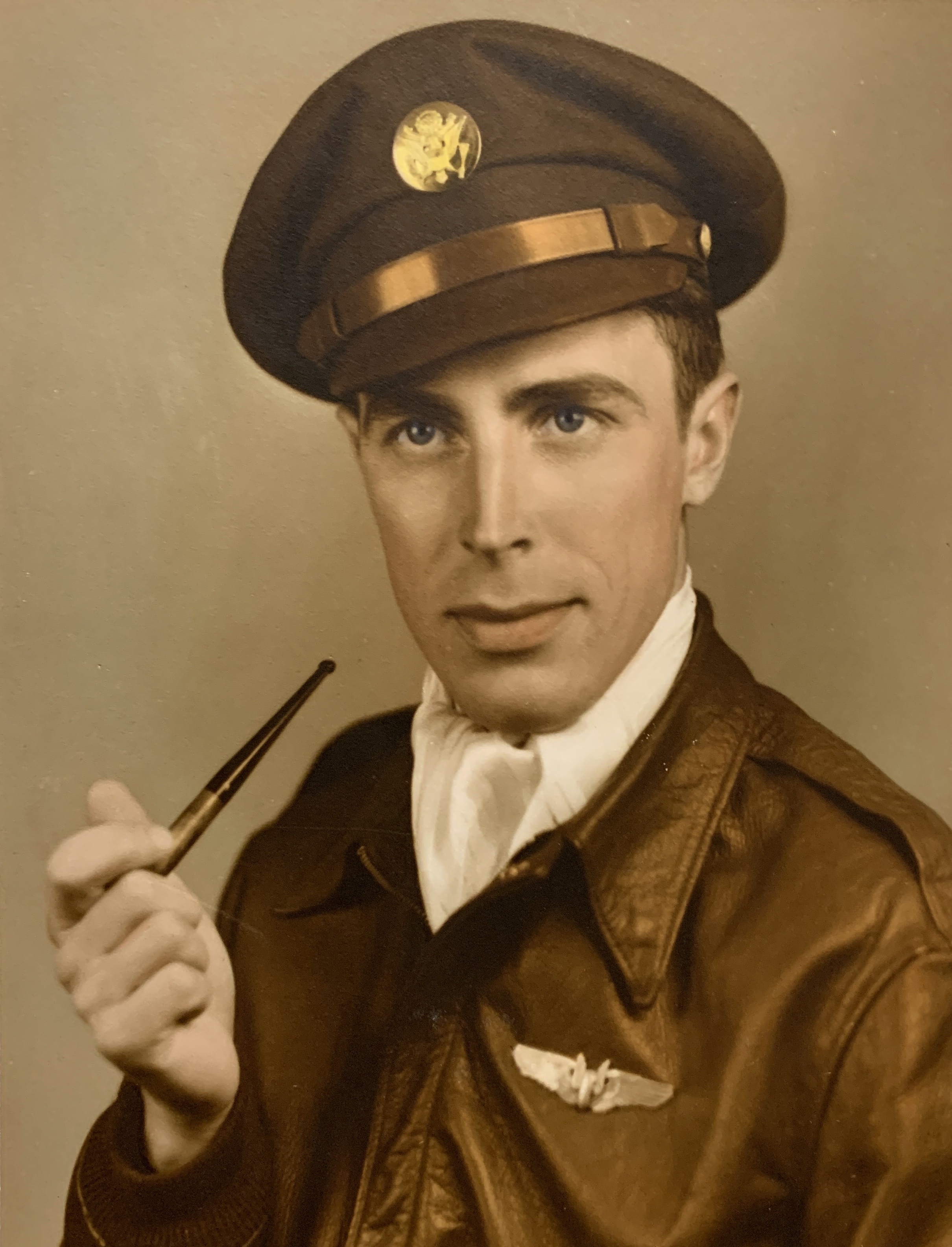 Kenneth Arnold was born the fifth son of six children to Kenneth William Morris & Edna Burrows in Littlefork, MN on December 8, 1922. Ken grew up in that small village, 10 miles from the Canadian Border, where his father owned a local grocery store and also had a farm outside of town. Ken worked at both. After graduation from high school, he attended college for a semester, but then responded to the need for workers in the war effort and left for California where he began working for Lockheed. Ken met Vivian Johnson at a party in Los Angeles given by mutual friends, and Ken described it as love at first sight. Unknown to each other when they met, Ken & Vivian were both born and raised in rural Minnesota, in small towns only 72 miles apart. After an engagement of 1 ½ years, they were married on January 8, 1944. Ken left for the Army Air Corps (which is now the Air Force) training in Texas 10 days following their wedding. After 10 months of training he was assigned to Polebrook Air Base in Peterborough, England. From December 9, 1944 to April 15, 1945, he flew 35 combat missions as a waist gunner on a B-17 Flying Fortress. Their first child, daughter Terryl Lynn was born the morning following Ken’s return to the states. When Ken was discharged from the service in October 1945, he and Vivian, along with their newborn, returned to Littlefork, Minnesota which was “home” even after all the years away. Ken built the family home on land next to his parents. Most of the Morris clan was still in Littlefork so those years were a time of extended family holidays and picnics. The next almost 10 years were spent in Littlefork, and three more children were born; son Roger Dale, daughters Patricia Ann and Debra Kay. During their time in Littlefork, Ken provided for his family by working as the head of maintenance for the township of Littlefork. This job added to his “jack of all trades” skills which included carpentry, electrical, plumbing, mechanics, and electronics; skills he used in building their home and throughout his life. His kids also remember him driving the school bus, making the town’s ice rink in the winter, and driving the dump truck and jeep. Ken also served as Chief of the Littlefork Volunteer Fire Department. Due to economic uncertainty, the decision was made to return to Southern California and a job at Lockheed in 1956. In 1964, Ken was given the opportunity to relocate with Lockheed to San Jose, so the family moved north. Ken retired from Lockheed in 1982 after 30 years, but remained in San Jose until 1996 when they moved to Scotts Valley to be closer to their oldest daughter. After their move, Ken was very active in their mobile home park, Spring Lakes, overseeing many projects and serving on the management committee. Ken and Vivian were married for 61 years, and he provided her care until she passed due to Parkinson’s Disease in 2005. Ken lived alone for 10 years until his oldest daughter moved in. Ken was strong in stature and toughness, a proud family man and a loving father. He was a patient teacher, and to the very end he tried to teach us how to carry on when he would not be here . He took special care to teach us how to maintain his beloved roses, his flower garden, and keep his home in an organized, particular way. Even loading the dishwasher had a process that could be done the right way, or if done the ‘wrong way’, would be quietly “fixed”! He loved the crossword puzzles in the Mercury newspaper, which he claimed kept his brain sharp, and enjoyed challenging his daughters with the “the daily super quiz”. He loved watching the hummingbirds at the feeders which he made sure were kept filled. He loved a good steak but meatloaf was his favorite and he had it for every birthday dinner. He could build anything, and always read the instructions so the process and result was “correct”. He was always offering to help, even after he was bedridden; two weeks before he passed he asked if he could help with the dishes and sincerely meant it. His steadfastness, care and love for his family was most important to him. His dry sense of humor when delivering a quippy one liner with a glimmer in his eye kept “his girls” (daughters and granddaughter) rolling in fits of laughter. Then he’d say “settle down ladies, you’ll disturb the neighbors!” Ken was gentle, humble, and witty. He loved roses, music and organization. He was quiet, but had very strong opinions. His set schedule was followed with extreme dedication and his conduct with people was always gracious. He was a true gentleman. Ken was a strong man: he survived a world war, built a lasting marriage, raised 4 strong children, bounced back from major cardiac surgery, and lived a full life for 97 years, 9 months and 22 days. He is survived by his daughter Terry Cleary, son Roger Morris, daughters Patricia Reinecke, and Debra Morris, and granddaughters Brianna Emmerich-Dann, Lorien Emmerich, Korina Emmerich and Kendra Cleary. In lieu of flowers, donations in Kenneth's name can be made to Hospice of Santa Cruz County, 940 Disc Drive, Scotts Valley, CA 95066 (www.hospicesantacruz.org)