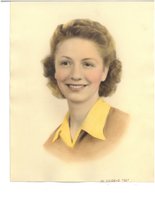 Ann was born Anna Marie Parish of Sturtevant, WI, to parents Joseph and Julia, originally from Croatia. Together with four older siblings (three brothers, one sister), Ann grew up attending local schools and speaking both English and Croatian. Ann set goals for herself and was diligent in her studies which led to being the only immediate family member to attend college. She pursued her education with excellence to earn a degree in Medical Technology from Marquette University. Ann was well-respected in her career and quickly earned the loyalty of the physicians who employed her. Over the years, she had the opportunity to work in varied locations such as Milwaukee, Honolulu, San Francisco, and Santa Cruz. It was during her time in Oahu that Ann met the man who would share her life, a young naval officer named David “Bob” Madsen. They were married February 5, 1955, celebrating their 65th anniversary earlier this year. After three years in Hawaii, they moved back to the mainland, settling eventually in Aptos, CA, where they have resided for the last 48 years. Together, Bob and Ann built their family home, raised their son, and enjoyed taking an active part in their community. Ann is survived by her adoring husband, Bob, and their beloved son, David, who resides with his wife Amye in McCall, ID. Ann devoted herself to being a wife and mother. She had a wonderful knack for creating deep, lifelong friendships both at home and abroad. She had a joyful zest for living and cared deeply for all those in her life. The family held a private graveside service. A celebration of life may possibly be scheduled in the future.