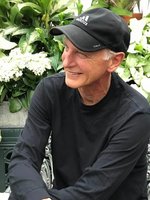 Jim passed away last month on July 26, 2020 in the arms of his beloved wife, Hope, in their mountain home in Aptos. He left us all too soon, sorrowfully succumbing to lung cancer. Born in San Francisco on September 13, 1947, he eventually made his way to Aptos, building his home in the forest and creating a paradise where he was the most gracious of hosts, sharing his love for nature, animals, fine wine and cooking with family and friends. Jim was a strong advocate of improving health and fitness at every age, and was a co-owner of CrossFit Santa Cruz Central. He was an innovator in the field for seniors and was sought out for his expertise by CrossFit trainers around the world. Before that, Jim was an educator for 26 years, as a devoted principal for both special needs and alternative school students. His kind heart, generosity and loving spirit touched many in both his personal and professional lives. Jim had a passion for travel, having visited countless countries to explore the life and culture of others. His sense of humor was appreciated by all, and his bright eyes and infectious smile seemed to be the only stamps needed on his passport to be welcomed in. Jim is survived by his wife; Hope Rhode Baker, brothers; Rick Baker and Danny Baker, former wife; Debby Baker, son and daughter-in-law; Sean and Kristen Rogers and grandchildren; Shane and Reese. He was preceded in death by his parents; James Howard Baker, Sr. and Anna Uglesich Baker. In lieu of flowers or planting a tree, contributions can be made to the Kainos Home and Training Center, 3631 Jefferson Avenue, Redwood City, CA 94062. Jim’s Celebration of Life details will be announced on this page at a later date.