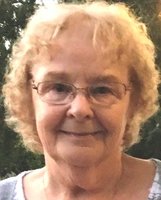 Carolyn Ann Ouellette passed away at Dominican Hospital on July 28th with her daughters, Cindy James of Brookdale and Michelle Cesario of Los Gatos, at her bedside by special arrangement due to Covid-19 restrictions. Born Carolyn Ann Ensign in Richmond, CA, she spent her early years in the East Bay until her father, Thomas S. Ensign, answered the post-war call to civilian duty and moved the family to a military base on the island of Saipan, a commonwealth of the United States. Upon returning to the States, the family relocated to Santa Cruz where Carolyn spent almost her entire life. She graduated from Santa Cruz High in 1961 and had fond memories of playing clarinet in the marching band. Carolyn worked in public service with the County of Santa Cruz for 35 years. It was there that she met Thomas Ouellette. They married in 1990 and shared a strong bond as kindred spirits until his passing in 2008. Carolyn was an avid crafter who enjoyed spending time quilting, knitting, crocheting and, for a time, doll making. In her latter years, she was an active participant in the knitting group at the Mid-County Senior Center. In addition to her daughters, she is survived by her son-in-law, Perry James and two grandsons, Daniel and Matthew, all of Brookdale. She was preceded in death by her grandson Andy James. In lieu of flowers, contributions in Carolyn's name can be made to the Mid-County Senior Center, 829 Bay Avenue, Capitola, CA 95010.