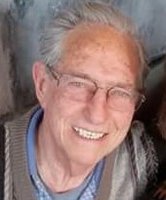 Robert F. Scott, 89, passed away at his home Wednesday morning surrounded by his family. A native of Sacramento, he grew up in Roseburg, Oregon and joined the Navy in 1948. He served during the Korean War. During the Inchon Landing pre-invasion, he was serving on one of the six Destroyers that were 800 yards offshore, referred to by General MacArthur as the “sitting ducks”. He was later awarded with a Navy Unit Commendation. He married Iwana in 1956 and they moved to Santa Cruz in 1966 to attend Bethany Bible College. Soon after, they started their family, raising four children: Bobby, Rhonda, Ronny and Danny. Bob continued working in the auto body repair trade at Kraft’s Body Shop, until starting his own family business, Scotts Body Shop in 1993. Bob loved surfing in Santa Cruz as well as salmon fishing and abalone diving. He also enjoyed car racing with is sons at Watsonville Speedway. He is survived by his wife of 63 years, Iwana, three boys, Bobby, Ronny and Danny Scott all of Santa Cruz, daughter Rhonda Good of Salinas, and his 6 grandchildren; Sierra, Robert, Davida, Sativa, Roland, Zachary. Military honors will be conferred for the family at graveside by the U.S. Navy Honor Guard at Oakwood Memorial Park on Tuesday, June 30, 2020 at 2:00 P.M. A Celebration of Bob’s Life will be held for family and friends at a later date. Please do as he did in his life and remember Bob by “Paying it Forward”. The family wishes to thank Hospice of Santa Cruz County and Bob’s caregivers, Mario and Cathy. If