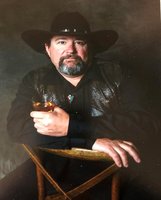 Sid “Moby” Slatter passed away peacefully on Sunday, April 5th. He was with his fiancé and surrounded by love. Sid’s larger than life persona partnered with his gentle, kind soul enveloped anyone who had the privilege to know him and will be missed greatly. Sid was born in Santa Cruz, California to Vann and Christine Slatter. Sid attended Good Shepherd School in Santa Cruz, California and later graduated from Soquel High School, class of 1986. He really loved being a part of the wrestling team at Soquel and there he made life-long friends. After high school, he began work for his family’s business, Slatter Construction since 1986. In 2000, he assumed his role as President of Slatter Construction. From the time he was 8 years old, Sid was a gardener- a natural farmer, but that was not all that he enjoyed on the topic of dirt. Four- wheeling and riding dirt bikes rounded out his active early years. Sid was a passionate outdoorsman. If his frequent camouflage attire (even with flip flops) did not give it away, his impressive photographs and trophies would. His love for hunting and fishing was obvious from the first time you met him. Sid had a passion for traveling. Creating his own trails, finding a private stream to drop in a line or traveling to somewhere exotic was his bliss. He was most happy when he was around water, from the ocean to the duck ponds. From a young age, the Gustine Gun Club was his home away from home. An avid duck hunter, Sid was a member of the GGC since 1993 and was past president and board member. Sid’s work in the community was admirable. He was a member of the Toastmasters before he joined Rotary to give him confidence to make his red badge speech. If you knew Sid, he had a way with words whether it was a toast or a roast, he always knew exactly what to say. Sid was a member of the Santa Cruz Rotary Club since 2004 and in 2016-2017 served as president. While in Rotary, he spearheaded a multitude of projects: the Rotary Parklet, Rotary Flagpole at Cabrillo College, Vets Brick Project and several other Rotary Fund Raisers. If you knew Sid, you knew that he was the most comfortable cooking for people. He loved gathering people, bbq’ing for them up at Hunter Hill Winery and hosting events for Rotary such as the Annual Past Presidents dinner and chaired the annual Rotary BBQ. Thru Rotary, Sid was also a supporter of the Young Writers of Santa Cruz. Several other community organizations benefitted from Sid’s involvement. He was a member of the Santa Cruz Chamber of Commerce since 1990 and joined the Board of Directors in 2018, a member of the Santa Cruz Business Council since 2006 and has served on their Board of Directors since 2008, a benevolent legacy indeed. Sid was a kind man, a trustworthy man, a man that just took care of things with ease. He was “the rock” for many that surrounded him. Sid was the epitome of strength, wisdom, calm, knowledge and a natural-born leader. He was the definition of the word loyal. He was respected by everyone that knew him. Sid is proceeded in death by his loving grandparents Sidney and Irene Carter and grandmother Peggy Slatter. He is survived by his parents Vann and Christine Slatter, his fiancé, Meredith Pozzi, his daughters, Emily and Caitlin. His brother Matt Slatter (Christina) of Soquel, his nephew Vann Slatter of Santa Cruz, his niece Alexandra Szoke (Nate), of Soquel, his uncle Rick Carter, of Scotts Valley and his grand nieces and nephews. He leaves numerous other family members and loyal friends. Sid was a perfect living example of love and belonging. We are all better having known him. A celebration of life will be held later this summer. Date and time to be determined. If you would like to offer condolences to Sid’s family, share your memories and light a candle in his honor please visit www.scmemorial.com