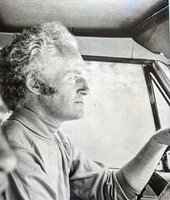 Bruce Alexander McDougal died in his beloved home on December 30, 2019 surrounded by his wife, Marcia, their three children, Stephanie, Kristen and Heather, as well as several grandchildren and great-grandchildren. Bruce was born on July 19, 1930 in Detroit, Michigan and spent his early years between Detroit and Ontario, the birthplace of his mother, Ruby Mima Stewart. Bruce graduated from Wayne University with a Masters of Art and then was drafted. He chose to serve in the Coast Guard where he obtained his officers commission and was assigned to work in Alaska for four years. During his last year of service Bruce achieved the rank of Commander and had his own ship in the San Francisco Bay. Shortly after being discharged he began teaching art at Drake University in Des Moines, Iowa. Three years later he married Marcia Raugust, who had co-founded the arts collective Chimney Potters in Berkeley, where Bruce and Marcia met. Marcia had a son and daughter by a previous marriage, and they all returned to Iowa with Bruce. In 1963 at the end of the school year, Bruce quit his job and they bought a school bus. Towing their truck they headed back to Berkeley where their daughter Heather was born. Bruce was offered a job at the model-making workshop of Walter Landor and Assoc. on their boat in San Francisco, as well as a teaching job at the Richmond Art Center. He took both offers while also advising Marcia with her newly-developed jewelry business. A year later they headed for Santa Maria, where Bruce taught his specialties, ceramics and jewelry, at Allan Hancock Community college. By 1966, Marcia’s jewelry business was taking off so they moved to San Francisco. During that year Bruce taught at the Richmond Art Center, and then accepted an invitation by potter Al Johnsen to start a pottery school at an abandoned ranch north of Santa Cruz, which they restored with the help of the owners, Big Creek Lumber founders and brothers, Homer "Bud" and Frank "Lud" McCrary. Bruce and Al built 24 potters wheels for the anticipated school at Big Creek Pottery, where students would live and work for 9 weeks per session. Bruce and Marcia used the library to send out brochures to universities around the country, and they had 25 students their first summer in 1967. By 1969, Al had left the school to pursue his own work while the McDougals continued running the school, selling pots at Renaissance Faires and art festivals in between sessions. Big Creek Pottery was active from 1967 to 1987 and drew the most popular ceramicists from around the world who were eager to teach their craft to others while experiencing the natural beauty all around them. In the early 1980s, Bruce and Marcia designed and built the New Davenport Cash Store, imagining a place for ex-students to live and work and support themselves through this retail outlet for their pottery. That part of the dream did not materialize, but with the McDougals’ experience feeding so many students and their love for crafts and ethnic art, the Cash Store soon became a local favorite. Later they acquired The Whaler, a local bar, and turned it into a bakery and second restaurant, which the family still owns. Bruce and Marcia were very close and remained partners in work and play for 57 years. Bruce was an extraordinary craftsman and all-around renaissance man whose personality and empathetic teaching style made a strong impression on everyone who came into contact with him. His humor and vitality made him an anchor point in every party. He will be sorely missed.