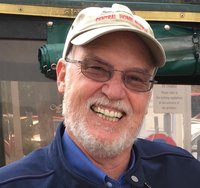 Services will be held Saturday, January 4th for Richard “Rick” Loring Santee who died on December 22nd at home after a long illness, he was 68 years old. Rick attended the University of Oregon where he met and married his wife Tawni. The young couple moved to Santa Cruz in 1972, where Rick co-founded Central Home Supply with his father. With his father’s passing in 1984, his brother Rusty left the Air Force to join him in running the family business. Rick fostered a special connection with his employees, who were loyal and were treated with respect and appreciation. Rick’s parents, Ann and John Santee raised their two sons to respect nature; leading mule packing trips sponsored by the Sierra club. Rick was an avid fly fisherman, back packer, and skier. King of the “Dad” jokes, Rick had a great sense of humor that he loved to impart on his grandchildren. He was happiest when spending time with his family at “Sequoia Vista”, a cabin that has been in the family since the late 1800’s. Rick is survived by his wife of 48 years, Tawni Santee, daughter Lisa (John) Lam, son Erik (Ana) Santee, (like a) son Christoph Hensche, brother Raymond “Rusty” Santee and 5 grandchildren. He was preceded in death by his parents, John and Ann Santee. Memorial service will be held on Saturday, January 4th, 2:00 p.m. at Oakwood Memorial, 3301 Paul Sweet Rd., Santa Cruz. In honor of Rick the family requests that you please dress casual; Central Home Supply attire is encouraged. In lieu of flowers, please donate to Habit for Humanity, contributions in Rick’s honor may be made to: www.habitat.org. Reception to follow at Seascape Golf Club 610 Clubhouse Drive Aptos, CA 95003.