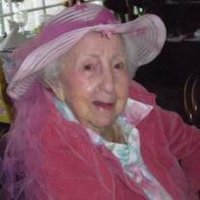 Rose O'Meila passed away peacefully in her home in Scotts Valley in the company of her loving family. Rose was born in 1907 in Los Angeles, CA to Polish immigrants, Sam and Selena Schwam. She grew up in Los Angeles and graduated from Los Angeles Polytechnic High School, a member of the class of 1925. The death of her father, Sam, in1908, led to a rich and varied life as mother Selena worked various jobs in the hospitality and entertainment industries to support Rose and her two older sisters Nettie and Helen. Upon Sam's death, Selena, Helen and Rose joined the Mission Play in San Gabriel, CA. This seasonal production was a historical presentation in music, dance, theater and narration of Father Junipero Serra's journey through California founding missions. At one year old, Rose appeared on stage as a papoose on her mother's back. Rose and Helen grew up as members of the Mission Play's ensemble cast for 13 years. In the off seasons, they joined a circus and travelled throughout the US. In 1916 their circus went bankrupt; stranding them in Monterey, CA, where they found temporary work on cannery row. At nine years old, Rose's cannery job was to cut the heads off of sardines. While working all the years with the Mission Play, Rose and Helen became accomplished at the art of Spanish dancing. Their dance talents opened doors in Hollywood's bourgeoning entertainment industry. One of the highlights of her life was signing a contract to dance with her troupe at the prestigious Graumann's Egyptian Theater in Hollywood at $25 a week...good money in 1926. Rose's family spent most summers on Catalina Island, where her mother found work as a cook in the hotel. While working on Catalina one summer, she met Theodore O'Miela (Ted). A certified accountant for the city of Los Angeles, he was also the child of Polish immigrants. Ted and Rose met again at the Cinderella Ballroom in Hollywood a year later. Rose and Ted married in 1927 and celebrated 61 years together. After Ted's death in 1987, Rose relocated to Scotts Valley to be near her daughter, Suzanne Smith and family. In her later years Rose enjoyed travelling and spending time with her family. She loved visits from her grandchildren and great-grandchildren to whom she told wonderful stories of the adventures from her youth. Rose is survived by her daughter Suzanne O'Miela Smith (Floyd) and four grandchildren, Ted O'Miela III (Dana), Mary O'Miela Schofield (Paul), Jeffrey Smith, (Sharon), and Andrew Smith (Tamera). She had eight great-grandchildren, and ten great-great grand children. Rose was preceded in death by her husband Ted Sr.; son Ted Jr.; and granddaughter Kathy O'Miela Haley (Mark), her parents Sam and Selena, and siblings Helen Schreick, Nettie Few and Tom Schwam. A graveside burial was held at Forest Lawn in Glendale, CA on May 19, 2012. There will be a family celebration of "Grandma Rose's" rich and adventurous life this summer in Santa Cruz.