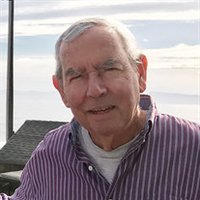 Frank Daniel Sutherland, 79, of Santa Cruz, passed away on the morning of April 19, 2018 surrounded by his loving family. He had fought a 3 month battle with cancer. His strength, love of his family and faith in God must have earned him the red carpet treatment in Heaven. He was a gift to all of us. He was born in Seattle, Washington to the late Reverend Frank and Gertrude Sutherland. He was the youngest of four brothers. The family moved to California when he was three months old. This always bothered him because he couldn't say he was a native of California. When he was in 5th grade his family moved to Santa Cruz. He graduated from Santa Cruz High School and attended San Jose City College. He married the love of his life, Victoria Harris, after meeting her "cruising" the Santa Cruz Boardwalk. It was love at first sight. He loved her long blonde hair and the way it blew in the wind when she removed her scarf that first meeting. He decided to buy our family home in Pleasure Point because of the way the moon reflected on the ocean. He was a Pleasure Point icon. He loved surfing on his longboard 8' 6" custom Haut with the Jimmy Hendrix airbrush and no leash attachment! He played tennis every week. He was also the best golf caddie that Dan Carmichael ever had! He worked in the grocery business at Opal Cliffs Market and always knew someone wherever he went. He retired from the Summit Store. He was in the Army National Guard and stationed at Fort Ord and Fort Hunter Liggett. During the Watts Riots in Los Angeles he was called to duty. He was a very loyal Golden State Warriors fan since the beginning and also loved the San Francisco Giants and 49ers. For over 20 years they looked forward to and attended the jazz/ragtime festival in Sacramento. We all enjoyed it when he would play the piano. He was a great example for all of us the way he loved his wife, three children and family. Family was very important to him. He was the sweetest, kindest, most amazing Husband, Dad, Brother, Papa, Uncle and friend. His calming nature, wisdom, love and most amazing smile made you feel comfortable and at ease. He is survived by his loving wife of 57 years, Victoria Jean Sutherland; daughter, Rebecca and Dan Carmichael of Fort Worth, TX; sons, Brian Sutherland of Ventura, CA; John and Julie Sutherland of Brookdale, CA; grandchildren; John Ferguson of Dallas, TX; Gavin and Gabrielle Sutherland of Brookdale, CA; brother, David and Barbara Sutherland of Kuna, ID; brother-in-law, Bob and Sue Harris of Aptos; and many loving nieces, nephews and cousins. He is also survived by Stella, the family dog. A Memorial Service will be held on Saturday, May 5, 2018 at 10:30 AM at United Methodist Church of Santa Cruz, 250 California Street, Santa Cruz, CA 95060. The family would like to thank Inez and Gloria from Hospice of Santa Cruz County for their special way of caring. To honor our Dad please give blood with the American Red Cross. He was so proud to have received his "5" gallon blood donation pin. Also, in lieu of flowers, please donate to the Santa Cruz SPCA, 2685 Chanticleer Avenue, Santa Cruz, CA 95065 or Alzheimer's Association, 1777 Capitola Road #A Santa Cruz, CA 95062. Every time we "feel the cool ocean breeze" we will think of you Dad.