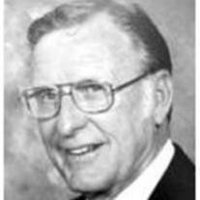 A loving husband, father, grandfather, great grandfather & great-great grandfather passed away on Sunday, May 6, 2012, in Soquel, California. George was born in Elko, Nevada on September 4, 1920, to Wilbur and Dorothy Smiley. He spent his youth on the family cattle ranch in Deeth, Nevada, until the family moved to Santa Cruz in 1931. He attended Branciforte Junior High School and graduated from Santa Cruz High School in the class of 1938. After high school, he attended Hartnell Junior College. He left school and started a career in construction. He worked in many parts of the Western US on projects from Camp Roberts to the Aleutian Islands of Alaska. George was a survivor of the bombing raid at Dutch Harbor. He enlisted in the 13th Special Naval Construction Battalion and served his country in the Pacific Theater. After the war ended, he returned home to Santa Cruz where he met and married Barbara Jean Noren Smiley in 1948. George had a long and successful career as a custom cabinetmaker in Soquel and Santa Cruz County. In 1948, he built his house in Soquel where he and Barbara raised their family and resided for the next 64 years. When not working in his shop, his favorite pastimes were hunting, fishing and supporting youth sports of both his children and grandchildren. He was also a volunteer fireman in the Soquel Fire Department and an active member and past president of the Midcounty Rotary Club. His wife Barbara preceded George in death. He is survived by his children Randall, Susan, Steven and Mark; his grandchildren Shawn, Hollie, Michelle, Rod, Michelle, Randy, Phil, Shannon, Sydney, Greg, Mathew, and Michael; his great grandchildren Rachel, Keith, Simon, Austin, Zachary, Jude, Scott, and Shannon; his great-great grand-children Bradley, Brooklyn and Hannah. Private graveside services will be held in Santa Cruz, California. If you would like to send your condolences to the Smiley family, share your memories, view or post photos, or light a candle, please visit www.scmemorial.com