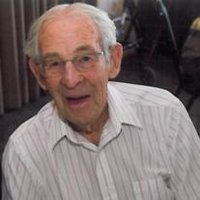 Dr. Howard F. Carroll, 96, was born in San Francisco, Ca. in 1917 to Howard and Helen Carroll. He attended Alamo Grammar School and Polytechnic High. Howard received a Doctorate of Veterinary Medicine and BS degrees from Washington State University in 1938. He married Ruth Crawford in August, 1940. He served in the Army and retired as a Major. Howard founded and operated the Marina Pet Hospital on Lombard Street in 1939 until retiring in 1969. While in San Francisco, he was a member of the Rotary Club, Lions Club and Shriners. After retirement, he attended UC Davis and received a Master's Degree in Veterinary Dermatology in 1970. He practiced Veterinary Dermatology for a few years on the Peninsula and then they moved to Ruth's family home in Boulder Creek, California. Howard became a "country gentleman" raising apples, goats, sheep and playing lots of golf. He and Ruth were members of The California, El Macero Ironwood, Pasatiempo and Boulder Creek Golf Clubs. Howard loved skiing with his family, "the Veterinary Tyrebiters," and friends. He spent many summers and winters at the family cabin at Donner Lake. He served as the President of American Animal Hospital Association, Honorary Life Member of the Veterinary Dermatology Society and worked as Continuing Education Director for the California Veterinary Association. Howard is a Charter Member of the California State Racing Pigeon Organization and served as President. He was also an active Boy Scout leader for his sons Denis and David. Howard and Ruth were married for over 70 loving years until she preceded him in death in 2011. Their four children are Dr. Denis M. Carroll (Anne), Patti C. Bascom (Hunt), Martha Barakah (Mohsen) and Dr. David C. Carroll. He is also survived by his many loving grandchildren: Michael Carroll (Rhea), Dr. Julie Carroll Valencia (Martin), Dr. Monika Connally (Mike), Scotti Bascom England (Art), Leon Bascom (Kristi) and Jacki Bascom Mansfield (Chris) as well as seven great children. He most recently resided at The Magnolia of Millbrae and thoroughly enjoyed his time there. There will be no public memorial service and the burial will be private.